As the 2016 election approaches, the debate among the intelligentsia appears like it will center around the question of inequality. While income is distributed unequally in the country, what few people know is how much more unequally wealth, financial assets and inheritances are distributed. As the chart below shows, income is only part of the problem. 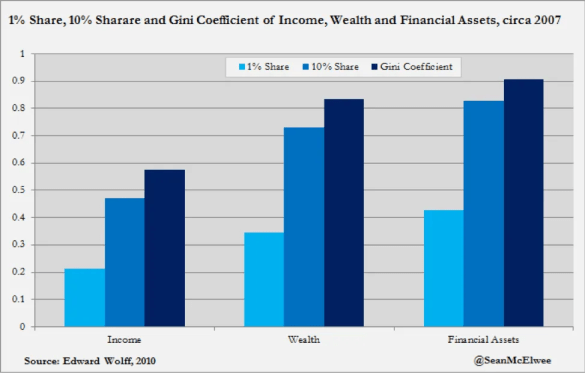 A deeper problem is that the wealth of most Americans, and particularly those at the bottom, has decreased dramatically in the wake of the great recession. A 2013 study found that, while in absolute terms, the recession impacted the rich the most, in relative terms it fell on the “lower-income, less educated, and minority households.”

Income and wealth inequality can have toxic effects on upward mobility, growth and democracy.

While much of the original research on inequality focused on how differences in income affected upward mobility (I covered that work extensively here), research has now also tackled the relationship between wealth and mobility. Gregory Clark, for example, findsthat wealth takes generations to dissipate. Meanwhile, W. Jean Yeung and Dalton Conleyfind that, “Liquid assets, particularly holdings in stocks or mutual funds, were positively associated with school-aged children’s test scores.” Another study, by Juan Rafael Morillas finds that the differences in earnings between black and white Americans “arises partly from the wealth inequality in assets ownership of blacks and whites.”

In a pioneering paper, Fabian Pfeffer and Martin Hallsten examine the effect of wealth on upward mobility in three countries (Germany, the United States and Sweden). They find that “parental wealth is also associated with both a reduced risk of intergenerational downward mobility and increased chances for upward mobility.” Michael Lovenheimfinds that families use household wealth to finance college, and that an increase in $10,000 in home equity boosts college enrollment by 0.7 of a percentage point on. The effect is even stronger for low-income families. The result of both high income inequality and high wealth inequality is more unequal opportunity.

Indeed, a 2013 World Bank study, Paolo Brunori, Francisco Ferreira and Vito Peragine find that, “an important portion of income inequality observed in the world today cannot be attributed to differences in individual efforts or responsibility.” Instead, “it can be directly ascribed to exogenous factors such as family background, gender, race, place of birth, etc.” They conclude, worryingly, that “[c]ountries with a higher degree of income inequality are also characterized by greater inequality of opportunity.” 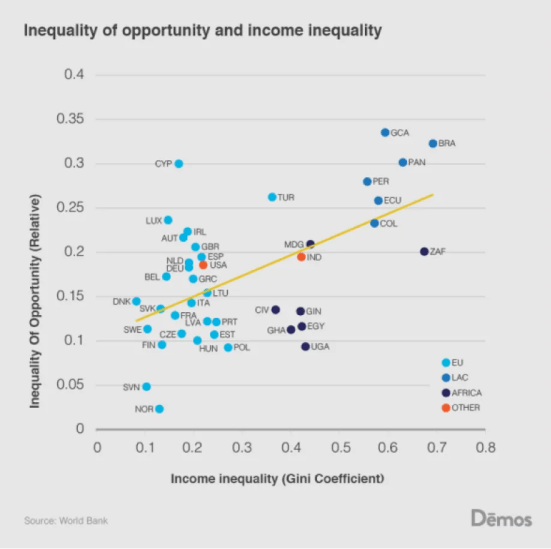 The implications of stalling upward mobility have implications for economic growth. When inequality presses down on opportunity, many low-income people can’t fully develop their capacities. As Stephen Jay Gould once noted, “I am, somehow, less interested in the weight and convolutions of Einstein’s brain than in the near certainty that people of equal talent have lived and died in cotton fields and sweatshops.” Today, even in a wealthy country like America, millions of bright young children have their cognitive development stunted by poverty. Wealthy parents invest heavily in their children, while low income families have less to spend. Further, as Miles Corak notes, the United States funds education at the local level, meaning that wealthier kids go to better schools than low-income kids. 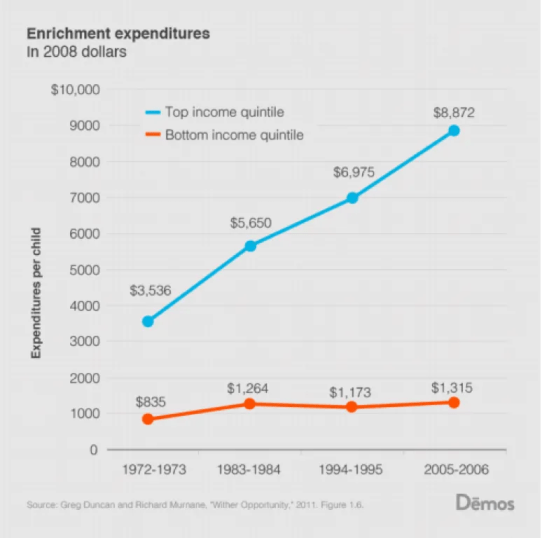 We saw above that inequality reduces equality of opportunity. This is important because unequal opportunity has been linked to lower overall economic growth.

In a recent conference paper building on the Marrero and Rodriguez work, Katharine Bradbury and Robert Triest find confirmation that inequality of opportunity slows growth. They struggle to find a causal relationship between inequality of outcomes and upward mobility (citing Deirdre Bloome’s recent work on the subject), but do suggest that it can reduce inequality of opportunity. For his book, “Our Kids,” Robert Putnam asked them to examine two cities with dramatically different rates of upward mobility — Salt Lake City (high mobility) and Memphis, Tenn. (low mobility) – to see how these differences affected growth. They find that if Memphis had the same levels of intergenerational mobility as Salt Lake City, the 10 year growth rate of real per capita income would grow by 27 percentage points.

There are other causal mechanisms by which inequality could reduce growth, depending on the causes of inequality. After surveying the literature, Heather Boushey and Carter Price find that, “studies that look at the longer-term growth implications find that inequality adversely affects growth rates and the duration of periods of growth, while those that focus on short term growth find that inequality is not harmful and may be associated with faster growth.” Worryingly, though, inequality particularly affects those atthe bottom of the distribution, suggesting that the wealthy may have little incentive to boost opportunity.

Inequality also undermines democracy. As some individuals become increasingly powerful, they may use that influence to shift the political system. As Theodore Rooseveltonce noted, “The absence of effective state, and, especially, national, restraint upon unfair money-getting has tended to create a small class of enormously wealthy and economically powerful men, whose chief object is to hold and increase power.” As his cousin put it, “We know now that Government by organized money is just as dangerous as Government by organized mob.”

There is evidence that our growing inequality has eroded the foundations of democracy. In his seminal book, “Affluence and Influence,“ Martin Gilens suggests that, “the growth in income inequality might play some role in explaining increases in responsiveness to the affluent during the 1980s and beyond.” He notes, however, that this wouldn’t help explain changes in responsiveness between the 1960s and 1980s. It’s very difficult to tell across time how inequality affects democracy. However, we can see inequality affects democracy at the state level. In a recent paper, Patrick Flavin finds that, “states with lower levels of income inequality tend to weigh citizens opinions more equally than states with wider income differences.” That is, in states with less income inequality, policy is less biased in the favor of the rich. He tells me, “The effect of income inequality is stronger than just about any other state contextual factor that I’ve looked at. “

Some inequality is good. If inequality is the result of innovation and hard work, it can make society better. The problem is that most of our rising inequality isn’t due to hard work; it’s due to changing government policies that benefit the rich at the expense of the middle class. And the result can be deadly. Recent research suggests that “people in unequal communities were more likely to die before the age of 75 than people in more equal communities, even if the average incomes were the same.” In “The Spirit Level,” Richard G. Wilkinson and Kate Pickett lay out comprehensive evidence showing how equal societies perform better on a range of social indicators. To restore democracy, and opportunity, we need to clamp down on inequality.