In the wake of the recent gutting of the Voting Rights Act, partisans were quick to jump on the opportunity to restrict unfavorable voters. Across the country, conservatives in particular have debated fiercely whether to pursue voter suppression to remain competitive in an increasingly diverse electorate. There was, however, another way out, as I’ve argued before: Socially and economically conservative values are not unpopular, and if conservatives were to cease supporting people who made speeches at KKK rallies, they could garner enough votes to remain competitive. I worried, though, that the temptation of voter suppression would be too great. And, indeed, a new paper by Ian Vandewalker and Keith Bentele indicates that partisans have chosen the path of voter suppression to an even greater extent than previous thought.

When the conservative Supreme Court struck down key parts of the Voting Rights Act in Shelby County v. Holder, states flocked to impose voter ID laws. Early research by Bentele and Erin O’Brien found these laws were “highly partisan, strategic, and racialized affairs.” Another study finds that “where elections are competitive, the furtherance of restrictive voter ID laws is a means of maintaining Republican support while curtailing Democratic electoral gains.” Support for voter ID laws among the American population is strong, but also racially based: Voters are significantly more likely to support a voter ID law when they are shown pictures of black people voting than when shown white people voting.

Much of the extant literature has mainly been focused on voter ID laws; but Vandewalker and Bentele find that the strategy is actually more expansive than that. They have created an extensive metric that includes nine different measures of accessibility, including voter ID, absentee voting and same-day registration. They find that the accessibility of voting systems is negatively correlated with the share of the state’s population that is black (see chart). As the black population increases, voting systems become more inaccessible. The chart below includes all changes that were passed in the legislature; as of writing some of the changes were stalled in court. 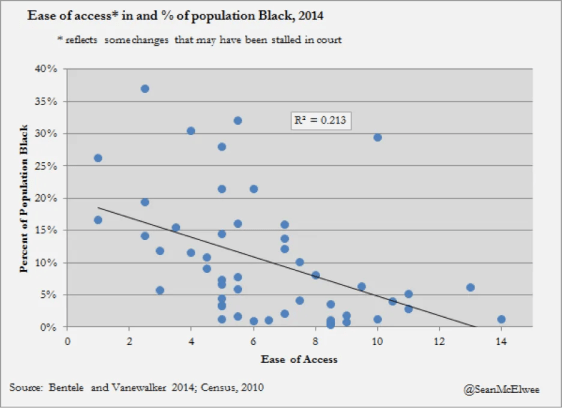 The study finds that between 2006 and 2012, the most influential factor in determining whether a law would be passed was Republican control of government. It also finds that the level of anti-black stereotyping in a state (a measure based on survey respondents’ beliefs about work ethic and intelligence) strongly correlates with the proposal (though not the passage) of voting restrictions. Vandewalker and Bentele find that states with a recent increase in Democratic turnout were more likely to pass a restriction indicating “the passage of voter restrictions as a partisan response by Republicans to recent Democratic electoral gains.” States with large black populations were significantly more likely to pass restrictive laws. Finally, they note that what little voter fraud exists does not correlate at all with voter restrictions.

The GOP has dramatically expanded its control of state legislatures in recent years. Before the 2014 election, Republicans controlled 59 of the 98 state legislative chambers;they now control 67. MSNBC recently reported that Republicans are already working to pass voter ID laws in five major states. Bentele and Vandewalker’s analysis indicates that “restrictive voting laws are often discriminatory responses to minority voting strength.” They find that the correlation between anti-black attitudes in the state and a restrictive voting system increased between 2010 and 2013. Conservatives have moved beyond just pushing for voter ID and have also worked to curb early voting and other important methods to increase access.

To see the combined effect of all these different measures, I obtained the data that Vandewalker and Bentele compiled. I find that there is a strong raw correlation between their ease of electoral access index and voter turnout (see below). Using a variation of their analysis, I also find that electoral systems are significantly more open in states with a higher white population. The ease of accessibility index was also strongly correlated with voter turnout in the 2012 presidential election. Combined with the large academic literature showing that voting restrictions reduce turnout and that turnout affects the outcomes of elections, there is a strong case that the current push to reduce voting rights is rooted in partisan ambitions. 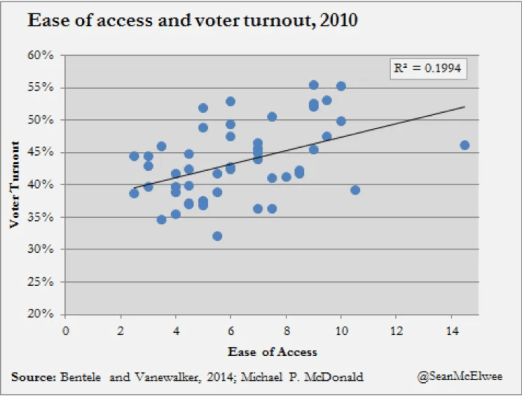 In America, it appears that nearly everything is now politicized, from sports to vaccines. However, the right to vote should not be a political pawn. To combat these attacks on voting rights, policymakers should expand early voting, enact same-day registration and reduce limits on felon voting. Congress should replace the old formula for pre-clearance with a new formula that takes into account how the racial composition of the electorate and non-white turnout affect the chance of voter restriction. All of these reforms can dramatically increase voter participation.

There is some hope: The Brennan Center for Justice recently found that “190 bills to expand voting access have been introduced in 31 states, compared to 49 restrictive measures in 19 states, the new analysis found.” This is a welcome development, however, my analysis of the Bentele dataset indicates that the overall change is positive, but modest. The chart below shows how voting access has changed between 2010 and 2014. States on the line remain the same, states above have seen voting rights contract, and states below the line have seen voting access increase. In total, 16 states increased accessibility while 14 states decreased accessibility. The mean score on the accessibility index shifted from 6.27 to 6.38 (assuming that all the passed laws go into effect). 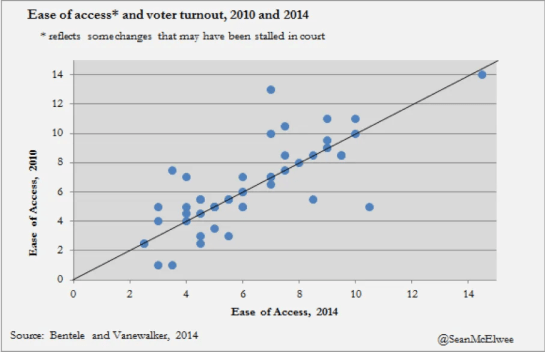 Voting rights are still in grave danger. And in particular, the voting rights of black Americans remain precarious.