The 2016 election is the first Presidential election that will occur since the Supreme Court struck down key provisions in the Voting Rights Act. Partially because of the weakened VRA, 10 states passed harsh new voting restrictions that will be in full force for 2016, including seven new voter ID laws. New studies suggest that the motivation of these laws is suppressing non-white voters, and worryingly, that they will be successful at doing so. As I’ve noted before, laws that shift the composition of the electorate have the impact of shifting resources away from low-turnout communities towards higher turnout communities. That makes these laws all the more worrying as 2016 approaches.

A number of earlier studies have already suggested that voter ID laws are motivated by voter suppression. Political scientists Keith Bentele and Erin O’Brien found the laws were, “highly partisan, strategic, and racialized affairs.” Later, Bentele and Ian Vandewalker found that, anti-Black stereotyping is “strongly associated” with the proposal of voter ID laws, though share of the population that are Black and turnout among people of color predict the passage of such laws. In an early study, political scientists Daniel Smith and Seth Mckee found that, “where elections are competitive, the furtherance of restrictive voter ID laws is a means of maintaining Republican support while curtailing Democratic electoral gains.”

In their new study, with political scientist William Hicks, they instead examine what predicts support for voter ID laws among individual legislators. They find, unsurprisingly, that partisan identification is the strongest predictor. However, the also find that, “Democratic lawmakers representing substantial black district populations are more opposed to restrictive voter ID laws, whereas Republican legislators with substantial black district populations are more supportive.” This is powerful evidence that voter suppression is at heart of support for voter ID. 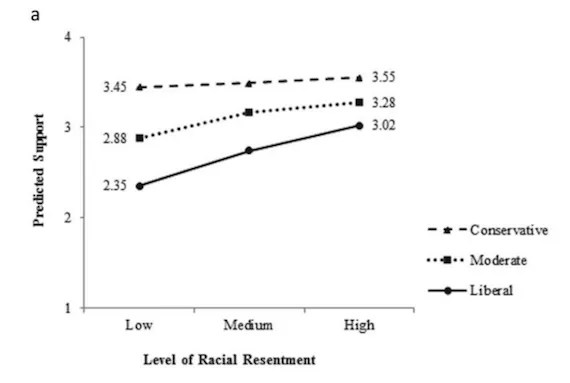 There are also questions of racial bias in implementation. A 2014 study by Ariel White, Noah Nathan and Julie Faller finds that when election officials are queried about voter ID laws, they are more likely to respond to emails from a white sounding name than a Latino sounding one (see chart). A 2008 study of New Mexico finds that Hispanic voters are more likely to be asked to show voter ID at the polls. Data from the Cooperative Congressional Election Study show that voters report being asked to show ID in states without voter ID laws, raising further concerns. 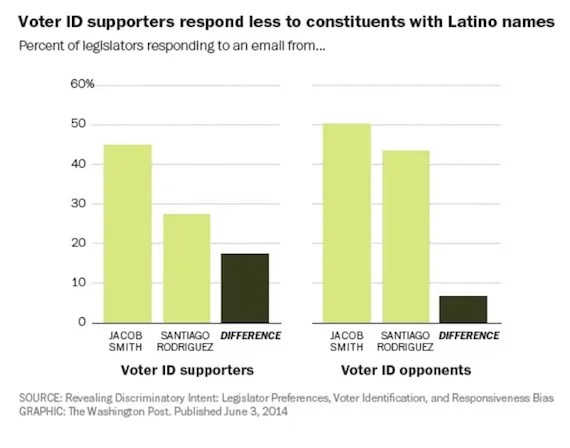 Although the study is still in the working paper stage, an important study by Avidit Acharya, Matthew Blackwell and Maya Sen finds that, “those parts of the American South where slavery was more prevalent in the 1860s are today areas with lower average black voter turnout, larger numbers of election lawsuits alleging race-related constitutional violations, and more racial polarization in terms of party identification.” Their work suggests that slavery created “incentives to to reinforce existing racist norms and institutions to maintain control over the newly free African-American population” which persist to this day. Given that the right to vote is still very contested, and the huge stakes of 2016, the impact of these laws is all the more important.

The impact of voter ID on turnout:

One of the most fiercely debated questions about voter ID is the impact it has on turnout. After studying the impacts of laws in Kansas and Tennessee, GAO finds that voter ID laws reduce turnout, though their literature review suggests the results of other studies were mixed. However, most of the previous studies were performed using data from before 2006, meaning that they were mostly examining the earlier, less stringent voter ID laws. In addition, because they used Census Bureau data, they were limited in the scope of analysis they could perform about the racial and partisan effects of voter ID. But a study currently under review by Zoltan Hajnal, Nazita Lajevardi and Lindsay Nielson shows that voter ID laws increase racial gaps in turnout, and skew turnout toward the political right (the chart come from a newer version paper provided to me by Hajnal). They find that the impacts are largest when the voter ID laws are strict, and that impacts tend to be larger in primaries. 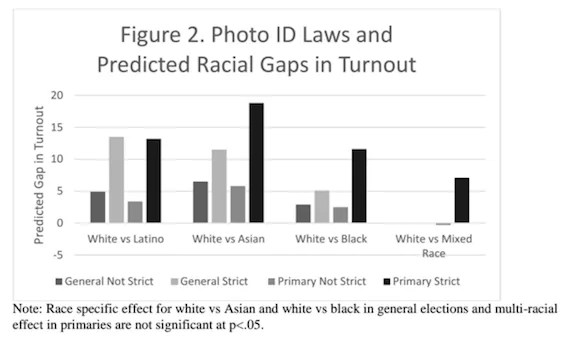 A recent survey of Texan non-voters living in a swing district finds that the voter ID law kept eligible voters away from the polls, and disproportionately benefitted the Republican candidate. There are good reasons to believe that ID laws would skew turnout, because research indicates people of color, young people and low-income people are less likely to have necessary identification.

These studies are key in that they make a very persuasive case that voter ID laws are exactly the type of racially-biased shenanigans that the Voting Rights Act was meant to prevent. As I’ve argued, politicians should actually be pushing for policies that make it easier, not harder to vote. The evidence is strong that AVR would be the most consequential voting rights reform in decades. Recently, I wrote about a 1976 political science dissertation that strengthens the case. It turns out that when registration laws were first being implemented, in many cases the burden of compiling lists fell on town and county officials, rather than on potential voters. It counties where officials compiled lists, turnout was higher than in counties where individuals had to register themselves.

This, combined with all of the evidence that registration is a key barrier to political participation and that policies that ease the burden of registration boost turnout, suggests automatic voter registration could dramatically change our nation’s political system. Demos recently released a report showing that automatic voter registration could bring at least 27 million new voters into the system (I worked on the numbers). Already in Oregon, the new Automatic Voter Registration system is having a big impact. NPR reports that, “More than 4,000 new voters were registered in the first six days — compared to an average 2,000 new registrations each month under the old system.” In addition, it is becoming increasingly clear that the preclearance provision of the Voting Rights Act, which was re-authorized by overwhelming majorities in Congress is necessary. Ginsburg was indeed correct: the Court threw out the umbrella, and we now face a torrent of voter ID laws.