In America, there is a strongly held conviction that with hard work, anyone can make it into the middle class. Pew recently found that Americans are far more likely than people in other countries to believe that work determines success, as opposed to other factors beyond an individual’s control. But this positivity comes with a negative side — a tendency to pathologize those living in poverty. Indeed, 60 percent of Americans (compared with 26 percent of Europeans) say that the poor are lazy, and only 29 percent say those living in poverty are trapped in poverty by factors beyond their control (compared with 60 percent of Europeans).

Such beliefs are just that: beliefs. While a majority of Americans might think that hard work determines success and that it should be relatively simple business to climb and remain out of poverty, the reality is that the United States has a relatively entrenched upper class, but precarious, ever-shifting lower and middle classes. While many Americans might hate welfare, the data suggest they are fairly likely to fall into it at one point or another.

In their recent book, “Chasing the American Dream,” sociologists Mark Robert Rank, Thomas Hirschl and Kirk Foster argue that the American experience is more fluid than both liberals and conservatives believe. Using Panel Survey of Income Dynamics (PSID) data — which has tracked 5,000 households (18,000 individuals) from 1968 and 2010 — they show that many Americans have temporary bouts of affluence (defined as eight times the poverty line), but also temporary bouts of poverty, unemployment and welfare use. (The study includes food stamps, Medicaid, Temporary Assistance to Needy Families/Aid to Families with Dependent Children, Supplemental Security Income and any other cash/in-kind program that relies on income level to qualify.) The researchers conclude that a large number of Americans eventually fall into one of these categories, but that very few Americans stay for long. Instead, the social safety net catches them, and they get back on their feet. 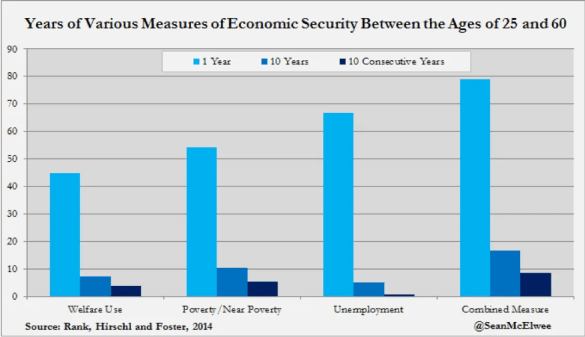 The authors also find that the risk of poverty is higher for people of color. (Since the PSID began in 1968, most non-white people in the survey have been black.) And while most Americans will at some time experience affluence, again, this experience is segregated by race. 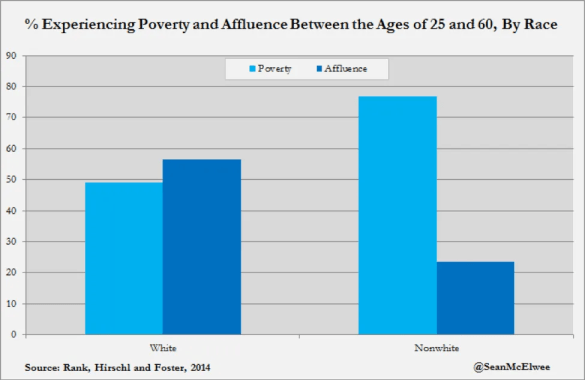 The researchers didn’t measure how being born into wealth effects an individual’s chances, but there are other ways to estimate this effect. For instance, a 2007 Treasury Department study of inequality allows us to examine mobility at the most elite level. On the horizontal axis (see below) is an individual’s position on the income spectrum in 1996. On the vertical level is where they were in 2005. To examine the myth of mobility, I focused on the chances of making it into the top 10, 5 or 1 percent. We see that these chances are abysmal. Only .2 percent of those who began in the bottom quintile made it into the top 1 percent. In contrast, 82.7 percent of those who began in the top 1 percent remained in the top 10 percent a decade later. 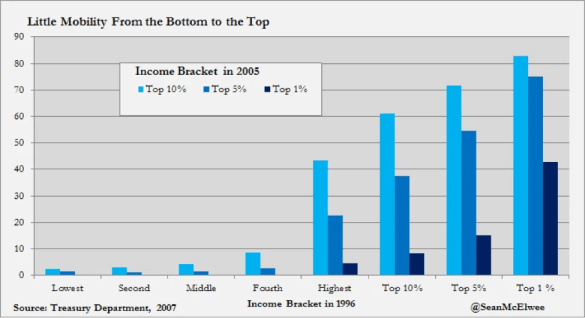 One recent summary of twin studies suggests that “economic outcomes and preferences, once corrected for measurement error, appear to be about as heritable as many medical conditions and personality traits.” Another finds that wages are more heritable than height. Economists estimate that the intergenerational elasticity of income, or how much income parents pass onto their children, is approximately 0.5 in the U.S. This means that parents in the U.S. pass on 50 percent of their incomes to their children. In Canada, parents pass on only 19 percent of their incomes, and in the Nordic countries, where mobility is high, the rate ranges from 15 percent (in Denmark) to 27 percent (in Sweden).

There is reason to believe that Chris Rock is correct that wealth, which is far more unequally distributed than income, is also more heritable.

“Groups that seem to persist in low or high status, such as the black and the Jewish populations in the United States, are not exceptions to a general rule of higher intergenerational mobility. They are experiencing the same universal rates of slow intergenerational mobility as the rest of the population. Their visibility, combined with a mistaken impression of rapid social mobility in the majority population, makes them seem like an exception to a rule. The are in instead the exemplary of the rule of low rates of social mobility.”

Clark finds that the residual effects of wealth remain for 10 to 15 generations. As one reviewer writes, “in the long run, intergenerational mobility is far slower than conventional estimates suggest. If your ancestors made it to the top of society… the probability is that you have high social status too.” While parents pass on about half of their income (at least in the United States), Clark estimates that they pass on about 75 percent of their wealth. Thus, what Rank and Hirschl identify, an often-changing 1 percent, is primarily a shuffling between the almost affluent and the rich, rather than what we would consider true social mobility.

The American story, then, is different than normally imagined. For one, Americans live increasingly precarious existences. In another paper, Hirschl and Rank find that younger Americans in their sample are more likely to be asset poor at some point in their lives. But more importantly, a majority of Americans will at some point come to rely on the safety net. Rather than being a society of “makers” and “takers,” we are a society of “makers” who invest in a safety net we will all likely come in contact with at one point or another. However, there are some who don’t.

Wealth and financial assets are the ticket to long-term financial stability; those who inherit wealth need never fear relying on the safety net. And it is these few individuals, shielded from the need to sell their labor on the market, who have created the divisive “makers” and “takers” narrative. Using race as a wedge, they have tried to gut programs that nearly all Americans will rely on. They have created the mythos of the self-made individual, when in fact, most Americans will eventually need to rely on the safety net. They treat the safety net as a benefit exclusively for non-whites, when in reality, whites depend upon it too (even if people of color are disproportionately affected). 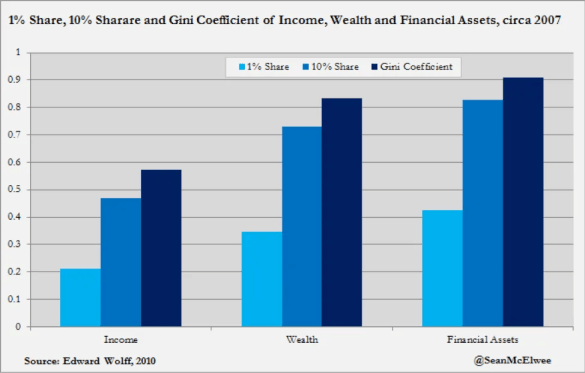 As I’ve noted before, the way the welfare state works (primarily inefficient tax credits for the middle class) has made this delusion tenable. It is therefore not that Americans believe themselves to be “temporarily embarrassed millionaires,” but rather “self-made men” (with a dose of racism), that drives opposition to the welfare state. The problem is that most people will eventually realize they won’t become millionaires, but few will realize the way government has benefited them throughout their lives.