Barring a massive strategic blunder, Marco Rubio is well-positioned to become the Republican nominee for President in 2016. The Florida senator is the ideal candidate to expand the Reagan coalition while holding on to the conservative base and he can take shots at Clinton that would sound hypocritical coming from Bush. While his power as a candidate has yet to emerge in the polls, a misstep by Bush will send him straight to the top.

Right now the Republican party is deeply fractured, and its coalition, at least at the presidential level, is weak. Republicans have failed to win the popular vote in 5 of the last 6 elections, and when they were successful, it was largely because of George W. Bush’s modest success with Latinos. The problem Republicans face going into 2016 is that the rise of the nativist Tea Party makes it difficult for them to woo Latino voters without losing their base. Rubio offers them such a bridge candidate.

Before exploring why Rubio could act as a bridge between conservatives and Latinos, it’s important to explode a key myth — that Republicans simply can’t win Latino voters; as I’ve noted before, there are indications that they can.. The problem is that appeals to Latino voters will often alienate the more nativist Tea Party portions of the Republican base. Thus, the GOP needs to find a candidate that can perform well enough to neutralize the Latino vote but also ensure that the conservative base turns out to vote. 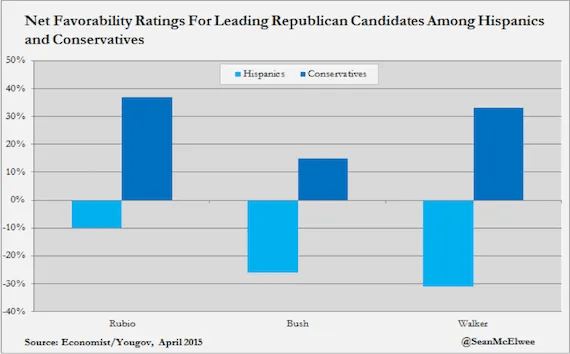 Republicans will also want to make inroads with the poor, the middle class and youth. Here again, Rubio has a distinct advantage, polling strongly with young people and the middle class (those making between $40,000 and $100,000). Among those making less than $40,000, Bush and Rubio are at a dead heat. (Scott Walker polls significantly better than both in this category, however.) 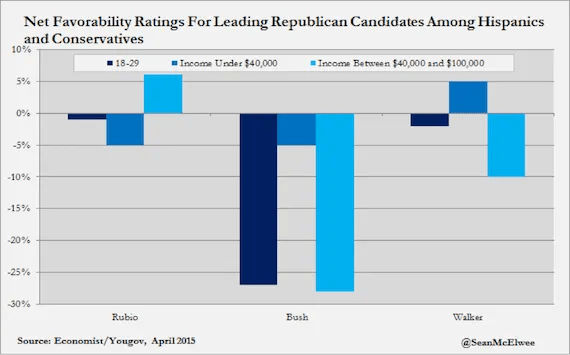 It could be that as Rubio becomes more well known, he’ll become less popular. This has clearly happened to Bush, who has seen his net favorability drop from negative 5.9 points in February 4, 2013, when 42 percent of respondents said that had “not heard enough” to judge him, to negative 16.2 points on April 21, 2015, with only 16.8 percent of respondents saying they had “not heard enough.” But even this argument doesn’t sink Rubio. In the same Yougov poll, Rubio’s “do not know enough” score is only 4 points higher than Bush among Latinos, 6 points higher among young voters (18-29) and 8 points higher with the middle class. Even assuming all of these “don’t knows” dislike Rubio (unlikely) his net favorability would still be higher than Bush’s.

As the chart below from Sam Wang shows, as a Republican becomes more well-known, he also becomes less popular. Bush fits perfectly on the trend, while Rubio is slightly above it and Walker is slightly below it. In a recent Wall Street Journal/NBC Poll, completed before Rubio announced his candidacy, 56 percent of Republican primary voters said they could see themselves supporting Rubio, with only 26 percent saying they couldn’t. Only Scott Walker, with 53 percent and 17 percent respectively, had better numbers, and Jeb Bush pulled in a squalid 49 percent in favor, 42 percent against. 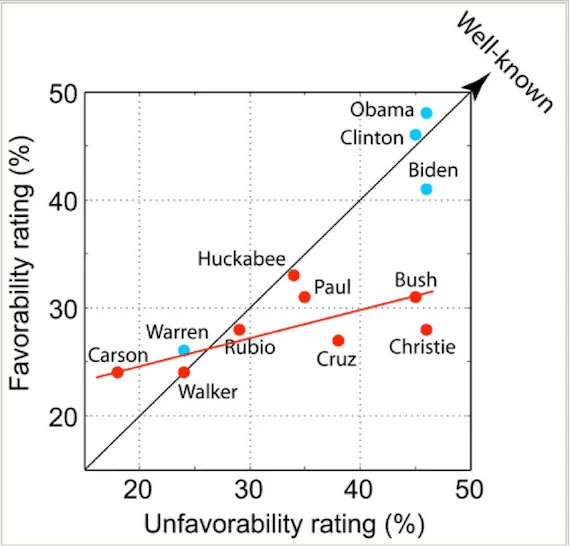 Republicans consider who their nominee will be must also consider how they are going to run against Clinton. It’s likely that they will prefer three major criticisms: First, that she’s dynastic; second, that she’s too old (an argument with sexist undertones, to be certain, but it may still resonate with voters); and third, that her Washington-insider status should disqualify her. Each of these arguments will be muted in the case of a Bush nomination, but could be much more persuasive coming from Rubio — the son of a immigrant father and a working class mother with strong Tea Party connections. He’s young and he’s targeted much of his rhetoric towards benefitting the middle class (no matter their dubious merit).

To test whether Rubio might be a better foil to Clinton, we can look at the Real Clear Politics General Election Match-Ups. The current average suggests that in a head-to-head election with Clinton, Rubio would lose by 7.5 points. The three most recent polls show Clinton up by 14 points, 2 points and 4 points respectively. In all three, Rubio loses. However, his margin is still lower than Bush, who loses by 8.9 points on average, and 17 points, 7 points and 4 points respectively. Walker loses by 8.6 points on average (22 points, 5 points and 6 points, respectively).

The most recent polls, taken from March and April, are shown below, where each bar corresponds to Hillary Clinton’s margin of victory in a hypothetical matchup: 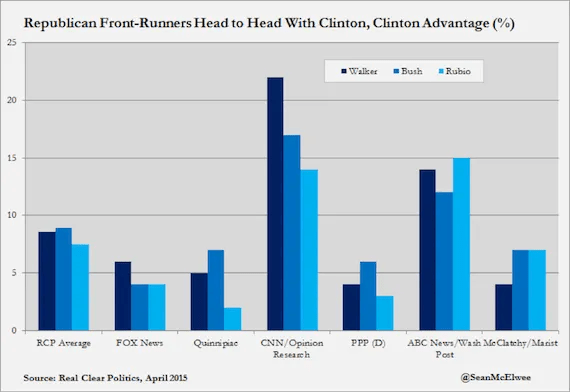 The other conceivable option on the table is Scott Walker, who does poll well with blue-collar Americans. The problem is that his strategy for winning the White House relies entirely on maintaining the old Republican coalition, which won’t be appealing to party elites. Recently, for example, he signaled opposition to immigration reform, which isn’t surprising given his vision of the party’s future, but will ultimately doom him as a candidate. Without making inroads into the Latino vote, Republicans will never take back the White House.

The arguments against Rubio, meanwhile, are melting away. Worried about his embarrassing SOTU response? Witness his energetic and moving announcement speech. Worried he won’t get the support of big backers? Sheldon Adelson may back his campaign. The failure of immigration reform in 2013? No support among party elites? Rubio just got kind comments from Brooks and Douthat. Stagnant wages and stunted upward mobility? Marco Rubio said it best in his announcement:

My candidacy might seem improbable to some watching from abroad. In many countries, the highest office in the land is reserved for the rich and powerful. But I live in an exceptional country where even the son of a bartender and a maid can have the same dreams and the same future as those who come from power and privilege.

Indeed, Rubio’s biggest problem seems to be that his impressive qualities show up everywhere but in the polls: Real Clear Politics still puts him below Walker and Bush. However, Rubio offers a perfect embodiment of the Republican vision of the American Dream. He’s offering a vision that may can win enough Latinos, working-class white, youth and Republican regulars to credibly threaten Hillary. He’ll likely be the Republican candidate.