It’s a long-running debate: Are rich people more conservative, and particularly more likely to be Republican? The answer is yes, and a large literature establishes this, but the debate still rages on, driven partially by the cognitive biases of elite commentators. In a recent study, Erik Peterson shed some light on the debate using a random event that could shift an individual’s political preferences: winning the lottery.

In his study, Erik Peterson examined how winning the lottery affected 1,900 registered voters. His work follows in the vein of recent research by Nattavudh Powdthavee and Andrew J. Oswald, who find that “[lottery] winners tend to switch towards support for a right-wing political party and to become less egalitarian. The larger the win, the more people tilt to the right.” Lottery winners were also more likely to express sympathy for the current distribution of income and wealth. Earlier work by Daniel Doherty, Alan S. Gerber and Donald P. Green suggests that lottery winners were more likely to express opposition to estate taxes and redistribution.

Unlike their work, Peterson eschews surveys, instead using data from the lottery winners’ voter files. In particular, he finds that lottery winners are more likely to become registered Republicans. The effect was modest for those who were registered before winning the lottery, but was more dramatic for those who had not been registered before. Thus: More money increases Republican identification.

As the data below (from the American National Elections Studies) suggest, the rich tend to be far more conservative than the average American and are far more likely to vote Republican. In a recent study, Nolan McCarty, Keith Poole and Howard Rosenthal find that between 1956 and 1996, “partisanship has become more stratified by income.” The ANES data also include conservative and liberal self-identification, and here again, those in the highest percentile are more conservative than others (21 percent of the poorest reported being conservative in 2008, compared to 59 percent in 2008). 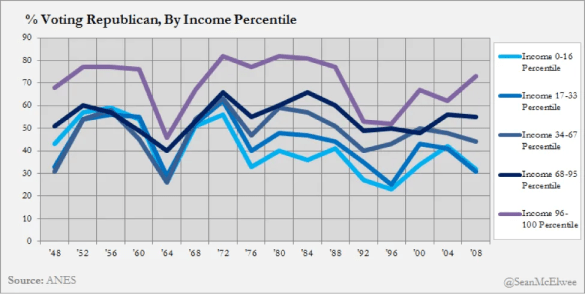 The rich are also far more likely to favor cutting services and spending (on a seven-point scale) than increasing services. 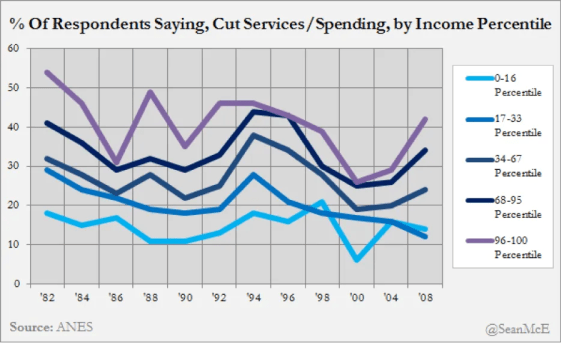 If the rich tend to be more conservative, why do so many influential journalists — like for example The New York Times’ David Brooks — argue that they aren’t? Some of the answer is misinformation. Republicans are trying to shed their reputation as the party of the rich, so many seize on scant evidence – like the fact that some exit polls showed that those earning more than $200,000 skewed toward Obama in 2008 — to make the case that in fact, the rich are more liberal. But even if commentators are not motivated by politics, there are two other factors at work:

First, the rich do tend to be more socially liberal than the poor and middle class, but with an important caveat. In one study, Benjamin Page and Cari Lynn Hennessy use the General Social Survey to examine the views of the richest 4 percent of the country. They find that the top 4 percent are “much more socially liberal or libertarian, and more economically conservative, than those of the average American.” Further, they find that these views are distinct from the top third of the income distribution. Thus, on a comprehensive metric of partisanship, the wealthy will appear more centrist because of their views on social issues. However, Stephen Ansolabehere, Jonathan Rodden and James M. Snyder Jr. find that “economic policy preferences are more important than moral policy preferences in accounting for voting behavior and party identification.” When David Brooks or other journalists note the social liberalism of the rich as evidence that they are Democratic, they are ignoring the economic issues that drive votes.

It’s worth noting here also that this idea, that the social conservatism of the working class has led them to vote Republican, is incorrect. Another factor at work is how geography and race intersect deeply with partisanship. As Larry Bartels notes, “white working-class voters see themselves as closer to the Democratic Party on social issues like abortion and gender roles but closer to the Republican Party on economic issues.” Further, in his seminal book on the subject, “Rich State, Poor State,” Andrew Gelman finds that “higher-income people have been consistently more likely to vote Republican, especially since 1970.” However, he also finds that “Voters in richer states support the Democrats — even though, within any given state, richer voters tend to support the Republicans.”

Essentially: In poor red states, partisan views are dramatically polarized by income. (And race is a significant factor here.) In richer blue states, there is far less polarization, and income does less to predict views.

However, there’s a final part of this story: Even the rich who do sympathize with the Democratic party are different from the average Democratic voter. In a pioneering study, Page, Jason Seawright and Larry Bartels interviewed 83 high-wealth individuals. Demos has examined those findings in more depth elsewhere, but a key finding that is rarely discussed is that

That is, rich Democrats still tend to have more economically conservative views. To test Page’s argument with another source, I ran some numbers using the American National Election Studies 2012 data. They have 2,000+ respondents who voted for Obama in 2012. I examined how opinions on spending differed among Democratic voters of different classes. I found that there are very little differences on issues like the environment and schools. However, on issues like Social Security and spending on the poor, wide gaps emerge. There are also differences in preferences about the size of government. This is only one source, but it lends support to the idea that there might be something distinct about wealthy opinion, at least as it relates to the role of government in the economy. 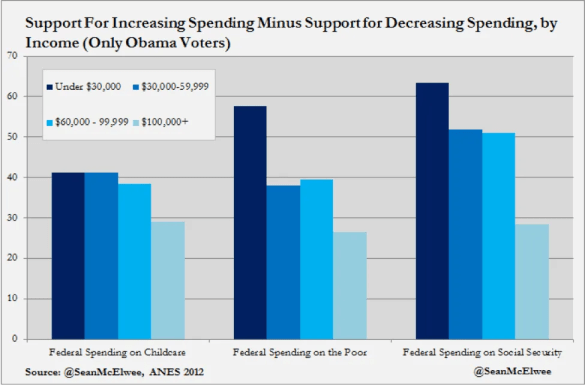 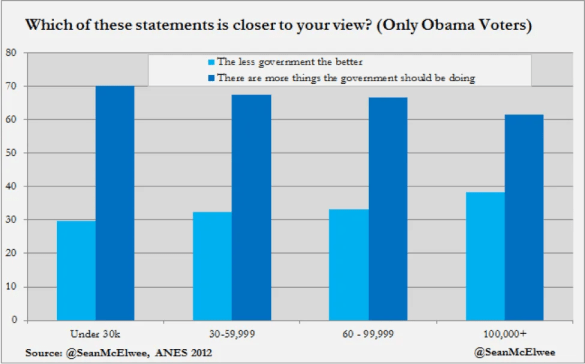 Given the extent to which our current political system is biased toward the rich, this finding should be worrying: Even rich Democrats aren’t strongly behind economic liberalism. One solution is to strengthen unions, which consistently advocate for policies that benefit the middle class and working class. Another solution is public financing, which could make the voices of ordinary Americans louder. The problem is, until the rich stop dominating the political system, one point of view will be heard more loudly in Congress.