Wal-Mart in particular is known for its status as a corporate-welfare queen; one studyestimates that one 300-person Supercenter costs taxpayers $904,542 to $1,744,590. Another estimates that Wal-Mart and the Walton family pull in $7.8 billion a year in tax breaks and subsidies. Meanwhile, a brand-new report from Americans for Tax Fairness finds that Wal-Mart also avoids taxes on more than $21 billion in offshore profits. In its most recent annual report, Wal-Mart openly admits that changes to government food stamp programs may hurt its financial performance. Hundreds of thousands of Wal-Mart workers make near-poverty wages.

Wal-Mart certainly benefits from other favorable government actions. Changes to labor laws allow it to abuse worker schedules, although sometimes it ignores them completely and just refuses to pay workers, flat out. Since Wal-Mart is a serial polluter, lax environmental standards are beneficial. It’s also very concerned about taxes, trade and intellectual property. To advance these interests, Wal-Mart spent $2.4 million on campaign donations and $12.5 million in lobbying in 2014 alone.

As the data below show, the last four election cycles have seen an explosion of big-box money in politics. 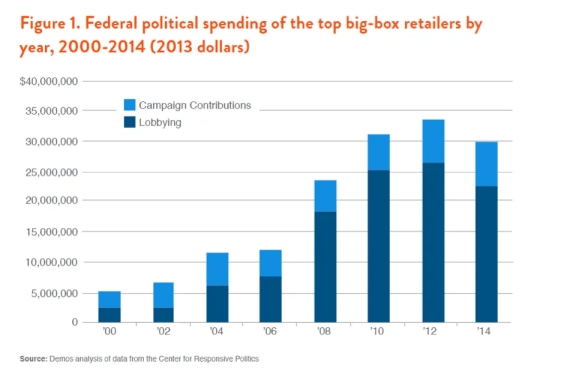 Of all spenders, Wal-Mart was by far the largest, followed by Home Depot. Both companies are considered “heavy hitters” by the Center for Responsive Politics, meaning they are among the top 100 political donors over the period for which data is available. 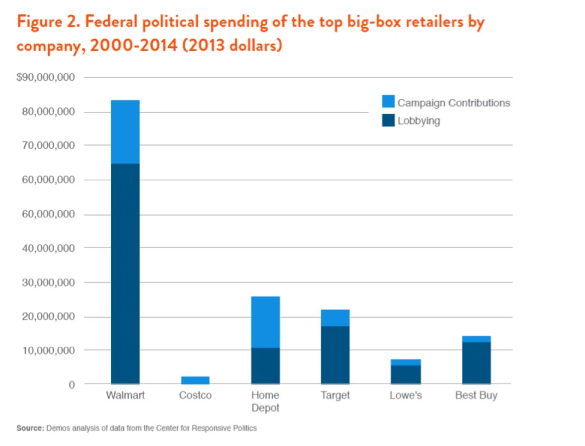 Even still, these numbers vastly understate political spending. For one, there is not yet a comprehensive database on state and local political spending. Further, many of these retailers are members of 501(c)6 groups like the American Legislative Exchange Council (ALEC) and the Chamber of Commerce; money paid to these groups is not reported. Also unreported are donations to 501(c)3 groups. As Demos has noted before, there is a clear need for stronger disclosure requirements, so that the full political influence of companies can be made available to the public. What we do know tells us that Republicans live up to their reputation as the “party of big business” and pull in more than $2 from retail for every $1 that goes to Democrats. With the exception of Costco, every big-box retailer heavily favors Republicans. 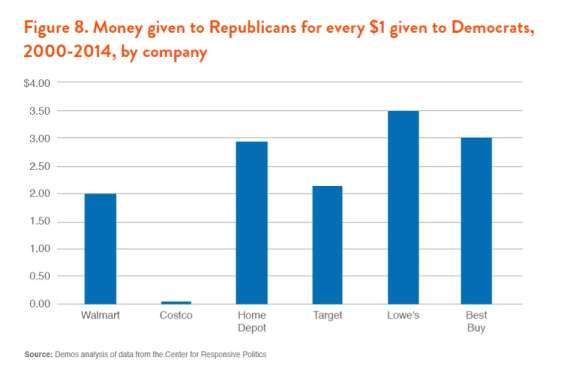 Numerous studies find that this money buys influence. Retailers lobby on a variety of issues, including tax policy, labor issues and the terms of international trade. A vast literature shows that these efforts produce returns, often at the expense of other democratic interests. In a comprehensive study of such conflicts, researchers found that business interests prevailed in 9 out of 11 issues in which businesses and labor were opposed. In the 16 cases that pitted business groups against citizen group coalitions, businesses won nine.

Taxes were the most frequently lobbied issue by large retailers in 2014, and by a wide margin. This legislative area has proven lucrative for business in the past; a 1 percent increase in businesses lobbying expenditures yields a lower effective tax rate of between 0.5 and 1.6 percent for the firm that lobbies. One study on the subject finds that the market value of an additional dollar spent on lobbying could be as high as $200. In 2014, the largest big-box retailers reported lobbying on a total of 37 incidences of specific taxation issues, including corporate tax reform, Internet sales tax and the extension of temporary tax breaks. The next most common issues of lobbying were health care reform, labor, antitrust and workplace regulations. As one example of the power of lobbying, the research firm Strategas maintains an index of the 50 firms that lobbying most intensely. The index has outperformed the S&P 500 every year since 1998.

What can be done to stop the spread of big money in politics? Over the long run it will be necessary to overturn laws like Citizens United that opened the floodgates of money into Congress. But there are also short-term solutions. The Supreme Court explicitly endorsed disclosure as the alternative to campaign contributions. On the heels of Citizens United, Congress came within one vote of overcoming a party-line filibuster to pass the DISCLOSE Act. In the absence of Congress, shareholders should demand that corporations either get out of politics, or disclose their donations to organizations like ALEC that they might not approve of. The SEC should require this disclosure if Congress won’t.

Publicly financed elections can help candidates not in the pockets of big money get into office, and more states should consider the system. To slow the rise of lobbying, states and the federal government should regulate it more strictly. Patrick Flavin finds that states with stricter regulations on lobbying are more politically equal — that is, responsive to voters of all income groups. Politicians need to tell Congress that even on Black Friday, government isn’t up for sale.