In 2014, voter turnout hit new lows for a midterm election: The most recent census data suggest turnout was a measly 41.9 percent. It’s likely that turnout was even lower, since the census data, while the best we have, is slightly inflated by the fact that people overreport socially positive behaviors like voting. Data that directly examines the number of votes counted suggest that turnout was around 36.6 percent of the voting-eligible population. But, while census data aren’t perfect, they allow us to examine turnout among different demographic groups (though even here, there are flaws). Looking at the data, I find a pretty stunning gender gap among one racial group: Black men are far less likely to vote than black women, and this is likely the legacy of mass incarceration.

The numbers are stark. In 2014, turnout among non-Hispanic white men was 45 percent, but among black men it was 36 percent (among Asian men it was 26 percent and among Latinos 25 percent). While the male/female turnout gap was 2 points on average, it was 1 point among non-Hispanic whites, 3.5 points among Latinos and 1.7 points among Asians. Among blacks, the gap was 7.7 points. 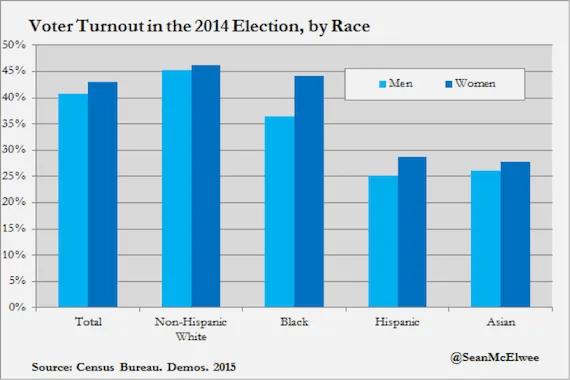 Validated data (which are far more accurate, but only available for some years) tell a similar story. A 2013 study by Stephen Ansolabehere and Eitan Hersh showed, using validated data, huge gaps in turnout between black (and Latino) men and women in the 2008 election. They write that, “The largest gender gap is among Blacks: black women are 17 percentage points more likely to vote than black men.” 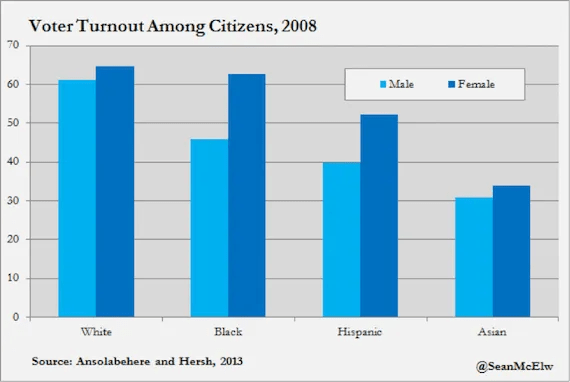 A sound reason for low-turnout among black men (and possibly among Latino men as well) is felon disenfranchisement. One recent study finds, “1 of every 13 African Americans of voting age is disenfranchised, a rate more than four times greater than non-African Americans.” The reason for why mass incarceration might depress black male turnout is simple: Both the Census Bureau and Ansolabehere/Hesh measure turnout as a share of citizen voting age population. However, a not insignificant share of the citizen population above the age of 18 cannot vote because they are either incarcerated or live in a state that disenfranchises former felons. (McDonald adjusts for this in his turnout data — though not for lifetime felon disenfranchisement.) As political scientist Bernard Fraga has shown, once this is controlled for, black male turnout actually exceeded that of white men and women in 2012.

There are other reasons to suspect that the carceral state is behind low black turnout, and could explain some of low Hispanic turnout. Vesla Weaver and Amy Lerman find that interactions with the justice system reduce civic participation, trust in government and voting. The effect is powerful: “The probability of voting declined 8 percent for those who had been stopped and questioned by the police; by 16 percent for those with a history of being arrested; by 18 percent for those with a conviction; by 22 percent for those serving time in jail or prison.” The relationship holds even after controlling for socioeconomic status and the propensity to commit crimes.

Politicians like Rick Scott, governor of Florida, have used felon disenfranchisement to maintain power. In 2011, Scott overturned an executive order that had previously allowed felons to regain access to the ballot box after navigating a complicated process. The result is that the number of disenfranchised felons in 2010 in Florida (although data on ex-felons are difficult to come by) was 1,541,602. For comparison, in 2014, 6 million ballots were cast in the Florida midterm, and Scott won by a mere 66,127 votes. One study estimates that former felons would turn out at a rate of about 24 percent in a midterm election. Assuming that level of turnout in Florida, nearly 370,000 more people would have voted — possibly costing Scott his seat.

The consequences of felon disenfranchisement are real. As I’ve noted before, voter turnout helps to determine the distribution of government, and depressed turnout means that many low-income and black counties receive less funding. In a 2003 study, Paul Martin found that counties with higher turnout receive more funding from the federal government, and, more recently, he and Michele P. Claibourn findthat “districts that vote at lower rates have less impact on their representatives’ policy positions.” That could be a part (though certainly not the full) explanation for why African-Americans aren’t represented as well as whites. Disenfranchisement also creates other problems: research suggests that restoring voting rights reducesrecidivism rates. 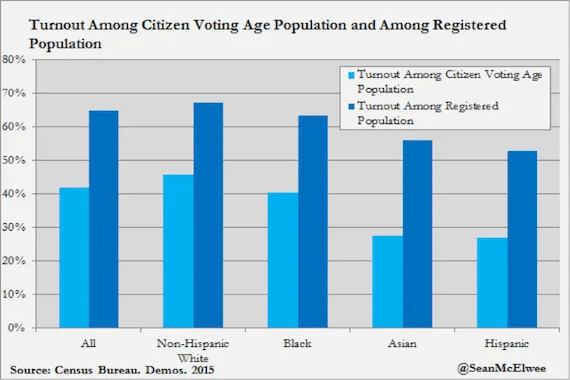 Ending mass incarceration and felon disenfranchisement is a first step toward healing our democracy, but it is certainly not enough. Another glaring disparity is turnout among Asians and Latinos, which can partially be explained by lower registration rates among those populations. Among registered Latinos and Asians, the gaps in turnout are far lower (see chart). But that’s only the first step:nonpartisan get-out–the-vote operations, competitive districts and easier access through both early voting and increased use of technology would also boost turnout. The policies politicians advocate can also boost turnout. But the results of Weaver and Lerman’s study suggest something further: we need to make sure that government is working to the benefit of Americans. When people primarily associate the government with policing and incarceration, they are far less likely to be active in their society and community. America cannot claim to be a true and vibrant democracy with so many still denied the basic right to vote and large shares of the population are locked in cages.