Commenting on the recent spate of mass shootings, President Obama said, “If public opinion does not demand change in Congress, it will not change.” He added, “Most members of Congress—I have to say to some degree this is bipartisan—are terrified of the NRA.” Obama is partially wrong to claim that the public needs to “demand change in Congress,” given the large literature on Congress’s poor responsiveness to the opinions of poor and middle-class voters. He is right to note the power of the National Rifle Association.

Political scientist Martin Gilens writes in Affluence and Influence, “By far the strongest association between interest group alignments and policy outcomes concerns gun control.” He investigated positions of interest groups and compared them to the public. He compared the “Power 25” group of lobbyists to the preferences of Americans at different points of the income spectrum. He finds, rather worryingly that on all issues, net interest group alignment, “is uncorrelated with the public’s policy preferences at any income level.” However, he finds that on some issues, the correlations are stronger. In the chart below, positive numbers indicate aligned interests, while negative numbers indicate divergent interests. 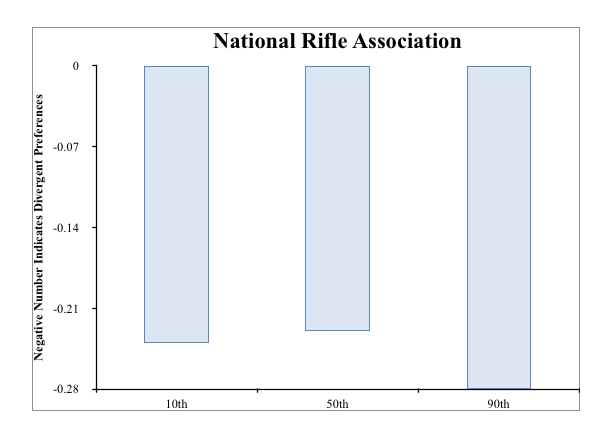 How does the NRA wield such a strong influence on policymakers? After all, in the year following the horrifying Sandy Hook shooting states were far more likely to pass laws loosening gun regulations than tightening them. During that period, there were 74 school shootings. Gilens notes that “pro-gun control groups spent less than one-fifth the amount on lobbying that their anti-gun control opponents spent.” Data from the Center for Responsive Politics show the stark difference in spending between the anti-gun control lobby and those in favor of gun control. 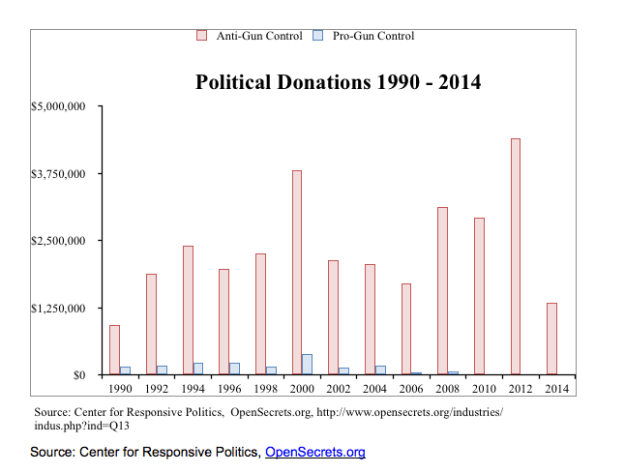 All of this is incredibly disturbing, not only for the fate of democracy, but for the possibility of stopping gun violence, which plagues our country. The solution is to increase the voice of the middle class and poor and curb the power of special interests. Studies at the state level offer us solutions. For instance, Patrick Flavin finds that states with stronger lobbying regulations have lower political inequality. He writes that these states, “tend to weigh citizens’ opinions more equally in the policymaking process.” One of the issues he examines is gun control. Other studies suggest that boosting voter-turnout reduces voting inequality. Lower voting inequality is tied to higher minimum wage laws, stronger anti-predatory lending laws and more money dedicated to SCHIP. It’s possible that this could also mean more stringent gun regulation, since there is strong support across income groups.

Curbing the influence of lobbyists, money and organized interest groups, while strengthening the voice of the poor and middle class is the solution to gun violence. The people already support gun regulation, the problem is making their voices heard in a deck stacked against them.