What would America look like if donors didn’t rule the world? It’s an interesting question and one worth pondering as the 2016 Presidential campaigns kick off. Available data reveals that donors not only have disproportionate influence over politics, but that influence is wielded largely to keep issues that would benefit the working and middle classes off of the table.

Do donors really rule the world? Recent research suggests that indeed they do. Three political scientists recently discovered that a 1 percent increase in donor support for a policy leads to a 1 percent increase in the probability the president supports the policy, if the president and donor are in the same party. On the other hand, they find no similar effect from general public opinion on presidential policies. In another study, Brian Schaffner and Jesse Rhodes find, “the roll call voting of members of Congress may be more strongly associated with the views of their donors (including outside donors) than with those of their voting constituents.” So who are these donors?

First off, donors are rich. Michael Barber performed a survey of about 2,870 donors who gave more than $200 in the 2012 election. The chart below shows the distributions of income and wealth, and donors are far richer. Fewer than 3 percent of donors reported an annual family income of less than $50,000 and more than 30 percent had an income greater than $350,000. 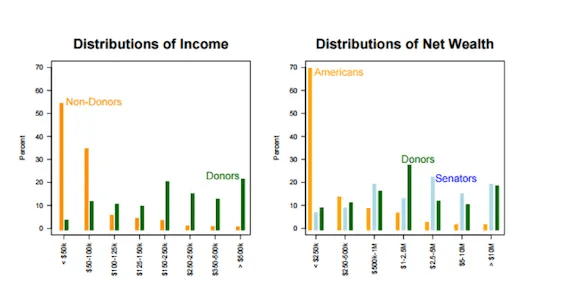 Donors are also whiter than the general public. Research suggests that 90 percent of federal contributions greater than $200 in the 2012 general election came from majority white neighborhoods. A study of the 2009 New York City municipal election finds that, at the highest levels of giving, the donor pool is least diverse. A study of Seattle’s 2013 election suggests that more than a quarter of contributions came from 391 contributors (0.07 percent of the population) who gave $1,000 or more. The research also shows that while Seattle is 67 percent non-Hispanic white, the neighborhoods from which more than half of contributions came from were 80 percent white. Other research suggests that donors are also disproportionately male.

Donors are also more conservative than the general public. There are two ways to show this. First, we can examine the preferences of the hyper-rich who make up the vast majority of donors. Benjamin Page, Larry Bartels and Jason Seawrightinterviewed some of these individuals, who make up the richest 1 percent of the population. Within their sample, 21 percent had helped bundle for candidates, and 68 percent had contributed money to candidates (an average of $4,633 over the 12 months before the survey). As the charts below show, these donors are more likely to oppose government ensuring that all Americans have healthcare coverage. In addition, while majorities of the general public favor national health insurance and are willing to pay more in taxes to provide health coverage to everyone, majorities of the wealthy disagree. 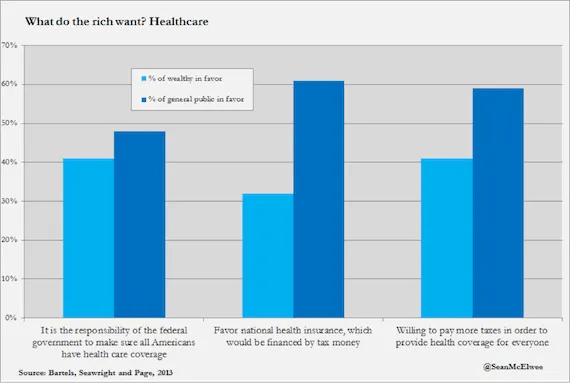 On issues of inequality, an interesting divide occurs. The rich agree with average Americans that inequality isn’t necessary for America’s prosperity and that income differences are too large. But, while the general public sees government as a way to reduce inequality, namely through taxes on the wealthy, the wealthy vehemently disagree. 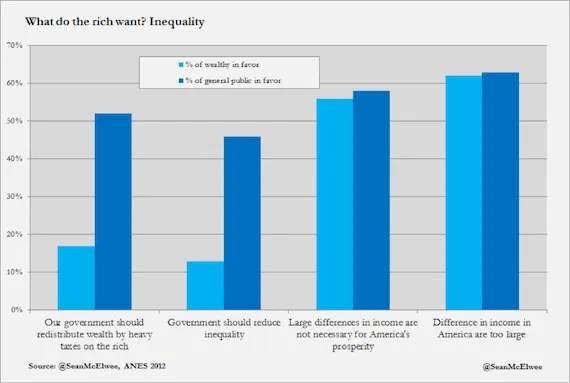 Another source on differences between the donor class and the general public is the 2012 CCES, which political scientists Didi Kuo and Nolan McCarty recently analyzed. The chart below shows the preferences of ordinary Americans, the donor population in general, and then specifically Republican donors on a broad swath of issues. The data show that donors tend to be more conservative. Even without addressing partisan affiliation, donors are more likely than non-donors to support the extreme House Republican budget (17 percent of non-donors vs. 21 percent of donors in favor) and the Bowles-Simpson deficit reduction package (47 percent to 54 percent). In addition, they are more likely to favor exempting contraception from the insurance mandate (37 percent to 45 percent). Republican donors, meanwhile, overwhelmingly supported exempting contraception from the mandate (88 percent). Finally, while the split between donors and non-donors on the ACA is small, only 9 percent of Republican donors supported the law, compared with 24 percent of Republicans who were non-donors. 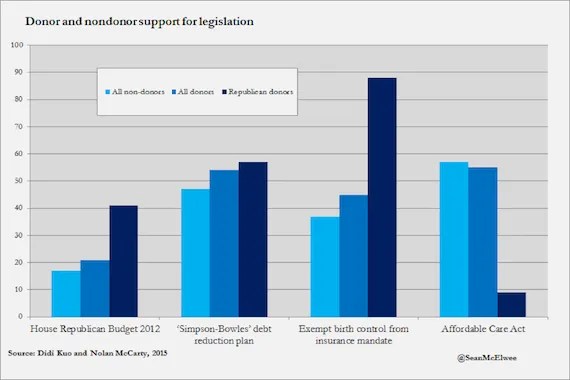 In the absence of the donor class then, our policies on economic issues would be more progressive. Adam Lioz has argued that policies would also be more racially equitable, noting that, “the drive for racial equity in America faces a serious headwind: the role of private wealth and big business in our political system.” Lioz outlined how big money has helped fuel mass incarceration, the subprime mortgage crisis and slow the passage of paid sick leave.

The solution to big money is two-fold. First, we need mass voter participation. The path is simple: Eliminate unnecessary barriers to voting, shift the burden of registration off of people and onto the government and expand nonpartisan mobilization efforts. But that won’t be enough as long as donors rule democracy. So we should broaden the donor pool with a vibrant public financing system. Evidence from New York suggests that a donor-matching system could increase the diversity of the donor pool, further bolstering democracy. Demos has profiled a number of candidates that fight for working class and non-white Americans but were massively out-raised by their opponents, and showed how small donor democracy would boost their chances of winning. Candidate Eric Adams, when commenting on the New York public matching system noted that, “a large number of people who contribute to my campaign have never contributed to a campaign before.” A world in which big donors are less powerful is a world where average Americans have more of a say in politics.