House Republicans originally shut down the government to defund the Affordable Care Act (because the 46 votes to repeal it and numerous efforts to under fund it have already failed). Now, they want a debt-ceiling increase to be tied to a “grand bargain” to reduce the federal. Both of these developments give us insight into the actual goals of Republicans. They don’t want to cut the deficit; they want to shrink government down to the size where the can drown it in the bathtub. And their not going to let reason, empathy or constitutional procedure stop them.

Let’s start with the plan to defund Obamacare or shut down the government. The premise here is that the ACA will represent and unprecedented government takeover of a private institution (read that twice, it’s wrong on three counts). But the new story is that the ACA will cause the federal debt to spiral out of control. This argument is even worse.

Dean Baker and Peter Rosnick have shown that if U.S. healthcare costs were in line with healthcare costs of other developed countries the U.S. federal deficit as a percentage of GDP would decrease over the next 80 years. 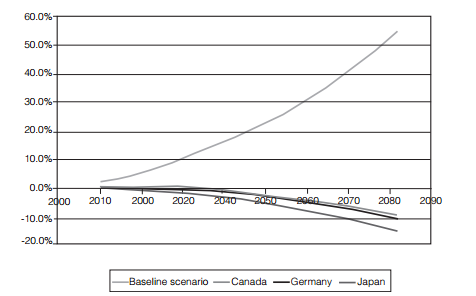 Healthcare costs are the most important driver of the deficit, and the Affordable Care Act represents a significant step towards reigning in healthcare costs. This isn’t just liberal propaganda, it’s the assertion of non-partisan groups like The Urban Institute, Kaiser Family Foundation and CBO. Certainly the recession has played a large role in the slowdown in healthcare cost growth, but the Affordable Care Act is also responsible, only three years after being signed into law.

All of this is happening despite the fact that Republicans have constantly worked to undermine the program by rejecting Medicaid expansion, underfunding the program and refusing to set up healthcare exchanges. Threatening to defund the ACA to get deficit reduction is akin to closing gyms to reduce obesity. But that’s the catch: the GOP isn’t trying to reduce deficits (“they don’t matter,” said Dick Cheney) they’re trying to reverse Obama’s signature legislation. In their war to destroy Obamacare, Republicans are shutting down the government, denying millions of poor people Medicaid and fomenting a constitutional crisis. But the debt-ceiling hostage negotiations are even more absurd.

Republicans are also holding the debt ceiling hostage in exchange for an insane list of demands (essentially the Romney/Ryan presidential platform). The idea here is to force Obama to tackle the “out of control deficits” that are, well, already falling at the fastest rate in 60 years.

But the entire idea is absurd prima facie. The reason that most economists worry about high levels of federal debt are three-fold: the threat of default, a risk of high interest rates and the need for distortionary taxes. But a default on the debt would instantly bring about all the negative consequences. A default would instantly increase the interest rates at which the U.S. can borrow in the future as well as bringing about another recession. A recession would only push the federal debt higher by reducing tax revenues and increasing the number of workers relying on the social safety net.

These observations can point to only one logical conclusion: Republicans aren’t actually worried about the deficit or debt. If they were, they would have accepted one of the many grand bargain offers that Obama put forward, one that would have reformed entitlements while raising revenues. But they’re not. Republicans are fighting an ideological war against government, the deficit is just a means to an end.