Since America’s founding, the franchise has been dramatically expanded in waves: first, universal suffrage for all men (first, through the abolition of property ownership requirements for white men, then the 15th Amendment) then the expansion of suffrage to women and finally the Voting Rights Act, which abolished poll taxes and literacy tests. Today, the franchise is still under fire, from racially biased voter ID laws and felon disenfranchisement, as well as our complex registration system. Automatic voter registration and the abolition of voter ID laws could be part of the next wave of the slow march to true democracy.

Recently, Hillary Clinton called out Republicans for their strategy of suppressing the vote and then called for automatic voting registration. While many pundits quickly chalked this up to an attempt to revive “the Obama coalition,” in fact, Clinton has been pushing for democracy reforms since before “the Obama coalition” existed. In 2005 she and Senator Barbara Boxer put forward the “Count Every Vote Act.” The law would have made same-day registration the law of the land, expanded early voting and made election day a holiday. In addition, Clinton has been fighting against felon disenfranchisement, though Rand Paul, who has a penchant for receiving praise for things he hasn’t done, has recently been garnering credit for his talk on the subject.

These three reforms — automatic voter registration, an end to voter ID, and an end to felon disenfranchisement — are hugely important. (Clinton also pushed for an expansion of early voting and making election day a holiday, no doubt significant reforms in themselves.) A new study by Michael McDonald, Enrijeta Shino and Daniel Smith suggests that reforms that make voting easier (like early voting) increase turnout, while those that make it more difficult (like voter ID laws) decrease turnout. This is important because there is growing evidence that conservatives are using voter ID laws to suppress low-income and Black voters.

I recently examined the fact that restrictive voting systems were strongly correlated with racial stereotyping. I also found that voter ID laws were correlated with racial resentment. When re-examining the evidence, I found something equally as stunning, between 2010 and 2014 the most racist states were significantly more likely to pass a photo voter ID law. Of the eight photo ID laws that were most strict, meaning that voters without acceptable identification must vote on a provisional ballot and also take additional steps after Election Day for it to be counted, all were in the top half of the racial stereotyping index. 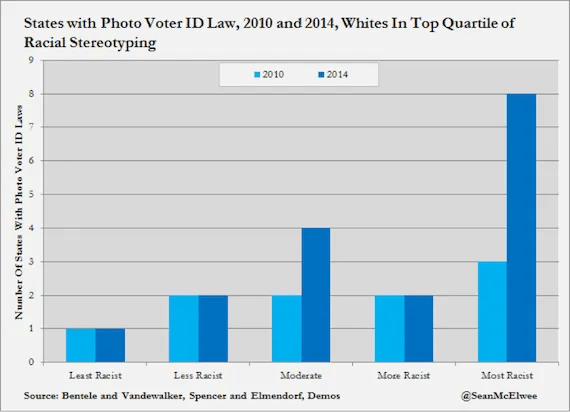 Studies suggest that these laws are passed with partisan intent, and there is evidence that they reduce voter turnout among the poor and people of color, by acting as a de facto poll tax.

Automatic voter registration would add 50 million people to the voting rolls, according to a recent estimate by Michael Waldman, president of theBrennan Center. As my chart below, created using Census data, shows, the beneficiaries will disproportionately be low income people, who are less likely to be registered. 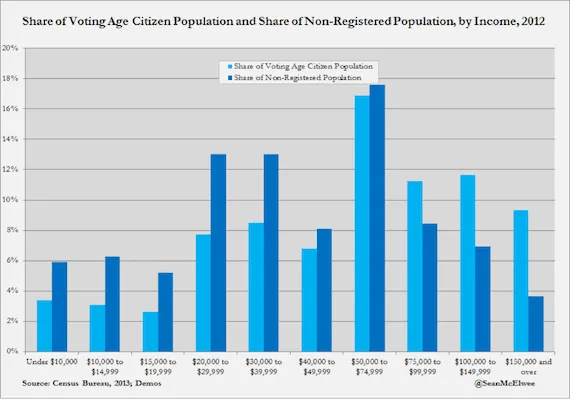 Will these voters turnout to vote? It’s impossible to tell, because automatic voter registration has never been tried (Oregon has passed a law, but it has yet to implemented). However, there are reasons to suspect it would. We know that registration is an impediment to voting, and reduces voter turnout. A study that randomly assigned streets for a registration drive found that streets that were targeted had higher turnout than the control. A recent literature review by elections expert Tova Wang finds laws like same-day registration and motor voter, which made registration far easier, increased turnout, particularly among the poor. Recent research by Elizabeth Rigby and Melanie Springer shows that boosting registration is the most effective way to reduce the class bias of the electorate.

In addition, we know that once people are registered, it becomes more likely they will be mobilized. Election reforms work in tandem with GOTV campaigns and other advocacy actions. In a study of state legislative elections, Peter Francia and Paul S. Herrnson find, “there is a statistically significant and positive interactive effect of campaign spending, party GOTV efforts and Election Day registration on turnout.” That is, a district with high levels of campaign spending and party GOTV efforts and Election Day registration has turnout 11 points higher than a district that has high levels of campaign spending and GOTV but not EDR. Using the ANES, I find a significant mobilization gap between registered and non-registered Americans. 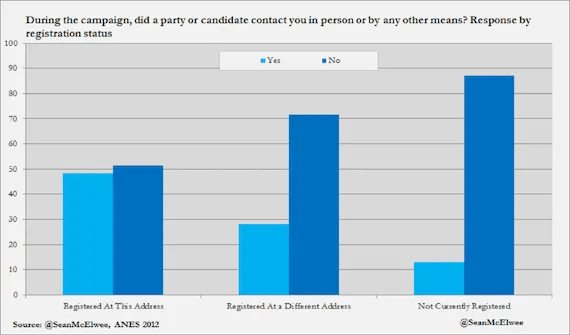 In an investigation of what caused voter turnout to decline between the 1960s and the 1980s, political scientists Steven J. Rosenstone and John Mark Hansen find that a decrease in voter contacting accounts for half of the decline in turnout. The problem is, in the status quo, mobilization is biased by class. In her study of mobilization between the 1956 and 2004 elections, Andrea Louise Campbell finds that “both the Republicans and the Democrats are most likely to contact top income earners.” This was not always the case – the rate at which the Democratic Party reached out to high income voters increased nearly four-fold between 1980 and 2004. In 2004, high income Americans were nearly three times likely to be mobilized by the parties, likely a significant contributor to class bias in turnout, which has dramatically shifted policy in favor of the rich. It’s not just parties that would have more incentive to target voters: labor unions, advocacy organizations and mass participatory groups would have a new pool of Americans to try to win over. Politicians would be forced to pay attention the concerns of the millions of Americans who are currently denied political voice.

Clinton’s stand against felon disenfranchisement is also significant: by reducing turnout among low-income Americans and Blacks, who are disproportionately likely to be caught up in the criminal justice system, it diverts precious resources away from their communities. While it’s unclear whether there will be any action on Clinton’s proposals, it’s clear that their effect on democracy would be profound.

The right wing fears the vote because it knows that voting is power. In 1977, Reagan was horrified by Carter’s push for universal registration, worrying that it would make the Republican party “dead as a the Dodo bird.” Recently Noah Rothman wrote in Commentary, “It will never be popular to oppose extending voting rights to what Daniel Foster calls, perhaps uncharitably, ‘civic idiots,’ but there is something to be said for privileging the informed voter.” His argument is reminiscent of William Buckley’s famous defense of Jim Crow, “The great majority of the Negroes of the South who do not vote do not care to vote, and would not know for what to vote if they could. Overwhelming numbers of White people in the South do not vote. Universal suffrage is not the beginning of wisdom or the beginning of freedom… The problem in the South is not how to get the vote for the Negro, but how to equip the Negro-and a great many Whites-to cast an enlightened and responsible vote.”  The language is is changed, but the rhetoric is the same: supremacy before democracy.

The end result of policies that restrict the franchise is to divert political influence away from people of color and low-income people and towards wealthy whites. Eliminating barriers to voting would be nothing less than a transformation of American democracy. That’s why conservatives are so terrified.