In my recent report, “Why Voting Matters,” I show the dramatic differences in opinion between voters and nonvoters, and argue that more voter turnout would lead to more progressive policies. One of the most dramatic gaps in opinion is between white voters and non-white nonvoters (shown below). As 2016 approaches, the question of how to mobilize the political power of people of color is increasingly being discussed with the rise of groups like Black Lives Matter. Though it’s clear that voter turnout will not be enough to fully realize political equality, it can have a dramatic influence on policy. 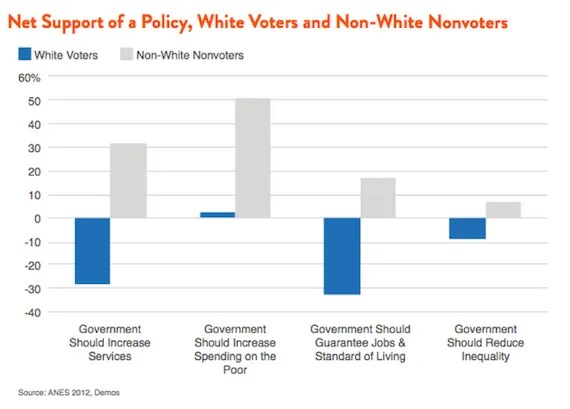 In a study released last year, political scientist Jon Rogowski and Sophie Schuit of the Brennan Center for Justice find that members of Congress representing districts covered by the preclearance provision (which was struck down by the Roberts court when it gutted the Voting Rights Act) were more supportive of civil rights legislation. The chart below (on the left) shows that as the black population increased, a legislator in a district protected by the Voting Rights Act became more liberal on civil rights, while one in a non-covered district became more conservative. The chart on the right shows that in more competitive districts, representatives covered by the VRA were more progressive on civil rights than in non-covered districts. As the authors write, “By guaranteeing the voting rights of Black constituents, Section 5 created the incentives for elected officials to better represent Black interests.” 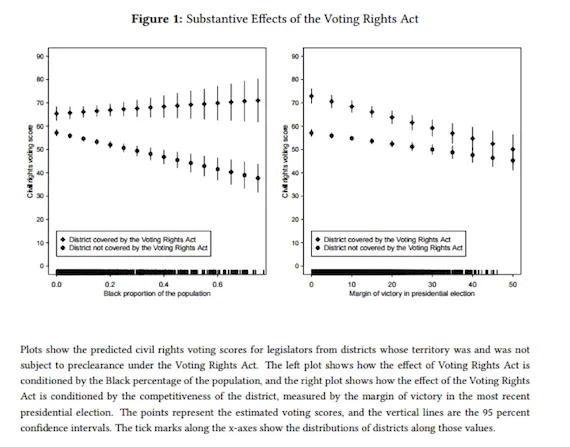 Other research on the impact of voting in the South comes to similar conclusions. For instance, economist Suresh Naidu finds that poll taxes and literacy tests lead to a decline in the teacher-child ratio at black schools of 10 to 23 percent (no effect on white schools). Economists Elizabeth Cascio and Ebonya Washington find that the boost in black turnout following the Voting Rights Act boosted state transfers to localities with higher black populations. Economist Ferran Elias finds that the court orders shifting cities from at-large elections to single districts (thereby guaranteeing black representation on the city council) boosted public good expenditures and tax collection, as well as the share of black public workers. He also finds that it boosted the value of houses owned by black citizens. This research all suggests that voter protections, many of them under assault by the court, have been integral to equitable representation.

A fascinating working paper from Brazil sheds more light on the importance of voting — and making voting as easy as possible. The paper examined a re-registration program in Brazil that affected 1,186 municipalities. The program pulled down registration rates by 10 points and turnout by 5 percentage points in the affected districts. The authors find that the effect was dramatic: “The newly elected mayors responded to this change by reducing public expenditure in areas that disproportionately benefit poor and uneducated voters (education and health).” Although the paper is still in the working-paper stage, it finds support from other similar studies: One from Princeton economist Thomas Fujiwara finds that the adoption of new electronic voting technology in Brazil, which boosted turnout among less-educated citizens, led to more government spending on healthcare. The result was increased prenatal visits, and therefore a reduction in low-weight births among less-educated women.

An increasingly large international literature suggests that districts or municipalities with high turnout are favored by politicians. In the U.S., Paul Martin finds that counties with higher turnout receive more funding from the federal government. In another study, he and Michele P. Claibourn find that “districts that vote at lower rates have less impact on their representatives’ policy positions.” A study in Japan that examined variations in turnout caused by rainfall, which reduces turnout, finds that municipalities with higher turnout received larger intergovernmental transfers.

This is not to say that voter turnout would entirely solve our entrenched political biases. The donor class, for instance, is overwhelmingly white, and politicians respond disproportionately to the preferences of donors. But they also responddisproportionately to voters. And voters are disproportionately white. I recently noted that non-Hispanic whites made up 76.3 percent of the electorate in 2014, while with equal turnout they would have made up 69.9 percent of voters, a difference of 6.4 points. For comparison, the change in the white share of the electorate dropped from 82.5 percent in the 1996 midterm, a 6.2 point difference. To put it another way, equalizing turnout would have a result equivalent to nearly two decades of demographic change. 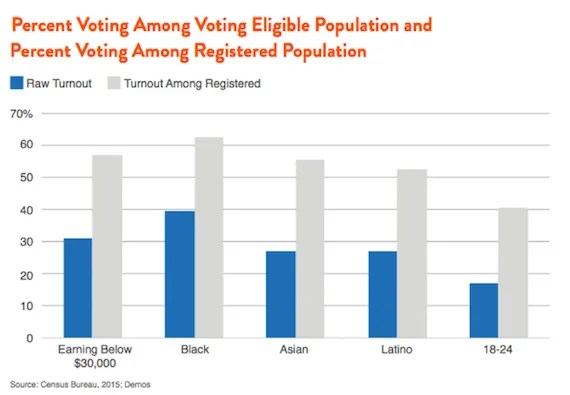 Because turnout is so important, eliminating barriers to access is all the more urgent. This presidential election cycle, the first without the full protection of the VRA, is seeing a deeply racialized attack on voting rights. As I’ve shown, white Americans are far more likely to stereotype black Americans in states with voter ID laws. Academics have made a persuasive case the voter ID laws are “highly partisan, strategic, and racialized affairs.” A recent study of early voting finds that “percentage of a county identifying as Black has a significantly negative association with early voting site density.”

The solution to our voting crisis is universal same-day registration and robust enforcement of the National Voter Registration Act, combined with automatic voter registration where the technological capability exists. In addition, Congress mustrestore the vital preclearance provision of the Voting Rights Act. Finally, nonpartisan GOTV operations and voter awareness drives can boost turnout. Bolstering the political power for people of color is a long-term project that involves removing many of the distortionary barriers to participation in our political system. A key step is boosting voter turnout. As the nation becomes diverse, its electorate must become more diverse as well. More inclusive turnout will lead to policies that better represent the needs of all Americans.