Political scientist Larry Sabato once said, “Every election is determined by the people who show up.” Though the quote is at first blush rather banal, it carries profound implications for American democracy. In my latest report for Demos, “Why Voting Matters,” I argue that who votes has profound implications for policy. I argue further that contrary to the view espoused by many political scientists, voters are not a “carbon copy” of the electorate, but rather older, whiter and richer — and therefore more conservative. 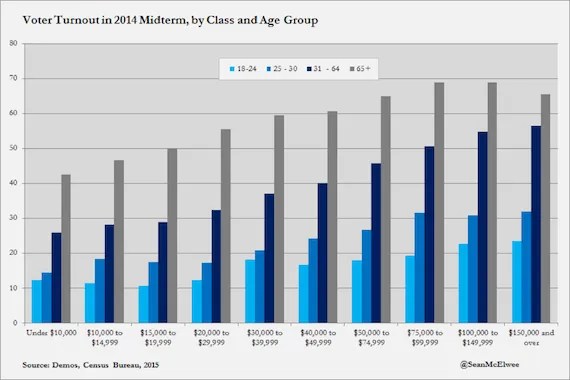 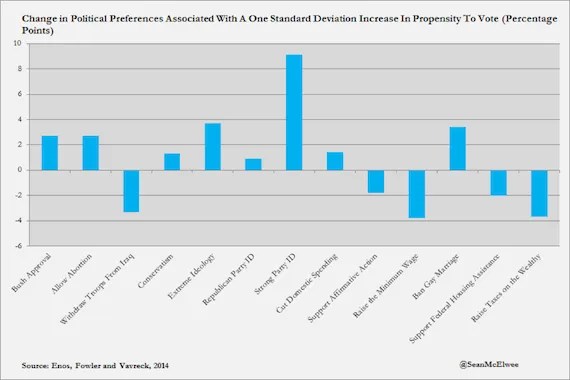 In a recent article, historian Rick Perlstein puts the American voter turnout problem in historical perspective. He notes that Jimmy Carter warned in 1976 that “millions of Americans are prevented or discouraged from voting in every election by antiquated and overly restricted voter registration laws.” Carter then proposed a battery of reforms: universal election day registration, aid to help states implement the law, more robust public financing of elections and an abolition of the electoral college.

Initially the plan was met with broad public support. Indeed, in a move unimaginable today, “William Brock, chairman of the Republican National Committee, called it ‘a Republican concept.’” Some Republicans called for going even further, “making election day a national holiday and keeping polls open 24 hours.”

However, not all Republicans supported the proposal to make the vote easier. Ronald Reagan wrote that it would “invite wholesale election fraud, restrict effective challenges to incumbents and render the Republican Party as dead as the Dodo bird.” As it happens, none of his claims were true then, and none are true today. Evidence of voter fraud is vanishingly slim, and Carter’s proposal actually pushed for measures to reduce fraud. Research shows higher voter turnout doesn’t benefit incumbents; indeed, low voter turnout entrenches them. Finally, it’s unlikely that voter turnout would cause an end to the two-party system. Rather, higher voter turnout would force both parties, Republican and Democrat to move more in line with the preferences of the American population at large, rather than the whiter, older and richer voting population.

Reagan’s opposition to Carter’s proposal is not entirely surprising. New research I’veexplored elsewhere shows that “The Reagan team assembled little data on the middle- and lower-income groups as it focused intently on gathering information on the affluent.” That is, Reagan used internal polling to ensure that his policies were in line with the preferences of the wealthy, not average Americans. His agenda, then, would certainly benefit if the people he ignored weren’t able to push him from office. There are differences in partisan affiliation between voters and nonvoters and voters, but the strongest differences are on the role of government in the economy and support for progressive causes (see chart). More voter participation would force both political parties to address deepening concerns about rising income and wealth inequality. 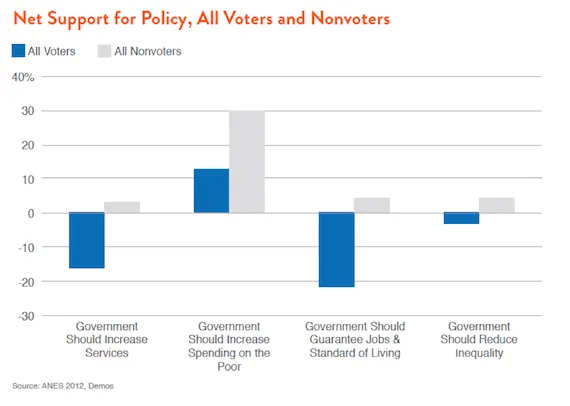 The solution to plutocracy and entrenched wealth is more democracy. Robust enforcement of the National Voter Registration Act (NVRA) can dramatically improve registration rates. Policies like Same-Day Registration can boost turnout, and could supplement Automatic Voter Registration (which shifts the burden of voter registration to the government). An all-of-the above approach to convenience voting measures makes sense, since their effect is likely to be strongest with universal registration and more competitive get-out-the-vote operations. The United States also needs a strong public financing system to increase the voice of average Americans against the overwhelmingly rich and white donor class. As the great Franklin Delano Roosevelt said, “The liberty of a democracy is not safe if the people tolerated the growth of private power to a point where it becomes stronger than the democratic state itself.”