In the run-up to the 2016 election, Republicans are trying to position themselves as the party of the middle class. In a recent essay, Thomas Edsall writes, “The Republican appropriation of leftist populist rhetoric (and even policies) poses a significant threat to liberal prospects in 2016.” It may well work, but not because Republicans are in fact reformist, but rather because voters and pundits eschew data and instead focus on rhetoric. When it comes to actual empirical evidence, the answer is indisputable: Democrats preside over far more income growth for the middle class than Republicans.

Princeton University’s Larry Bartels has two studies on politics and income distribution, and together they encompass almost a century. His finding: under Republicans, the poor and middle class see almost no income growth, while under Democrats, they see dramatic growth (see charts). As he notes elsewhere, even after numerous controls, these partisan differences remain. “Every Republican president in the past 60 years has presided over increasing income inequality, including Dwight Eisenhower in the midst of the ‘Great Compression’ of the post-war decades,” Bartels writes. “And every Democratic president except one (Jimmy Carter) has presided over decreasing or stable inequality.”

In another recent study, Alan Blinder and Mark Watson find that on a number of economic indicators, the country fares far better when a Democrat is in office. GDP growth is 1.8 point higher under a Democratic presidency, unemployment is lower, corporate profits are higher, the S&P grows faster and wages grow faster. This difference is not found in other countries, suggesting that the particularly rabid nature of American conservatism may be an important factor. It could also be that the effect is purely luck (although there is evidence to suggest that left-wing governments can facilitate growth). But the fact that the economy grows faster under Democrats is not enough to explain why the middle-class fares better. As the chart below shows, much of the distribution leg-work occurs after taxes and transfers. This isn’t to say Democrats don’t shape the pre-tax distribution (they do), but rather that simple differences in market distributions of income can’t explain the difference. 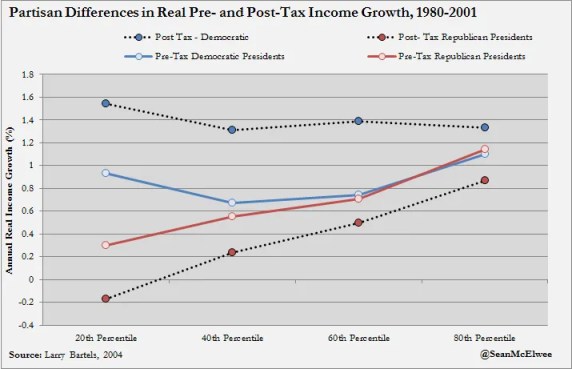 As John B. Judis argued — contrary to his seminal proposition of an “Emerging Democratic Majority”  — the future now belongs to the Republican party. It’s increasingly likely that Democrats will continue to have a slight advantage in the electoral college, but struggle elsewhere, for reasons I’ve previously discussed. So, while Judis’ thesis that middle-class whites are dramatically shifting right is contestable, he raises an important point: Middle-class Americans like services but dislike taxes, and Democrats currently appear to be the party of taxes. And so, the struggle for Democrats is what Suzanne Mettler refers to as the “submerged state.” That is, the way the government actually benefits the middle class often goes unseen, while taxes, particularly the income tax, are very obvious. Mettler notes that our federal tax code is full of handouts like the Mortgage Interest Deduction, but these tax benefits primarily benefit the affluent and middle class. “Our government is integrally intertwined with everyday life from healthcare to housing, but in forms that often elude our vision,” she argues.

The implication is that many people who believe themselves independent of government support in fact rely heavily on it. The Congressional Budget Office estimates that the 10 largest tax breaks cost the government $900 billion in 2013. But the benefits accrue to the wealthy: The top 1 percent gets 17 percent of the benefits and the bottom quintile only 8 percent. As the New York Times reported in 2012,

“The government safety net was created to keep Americans from abject poverty, but the poorest households no longer receive a majority of government benefits… The share of benefits flowing to the least affluent households, the bottom fifth, has declined from 54 percent in 1979 to 36 percent in 2007, according to a Congressional Budget Office analysis published last years.”

As Christopher Howard notes in his book, “The Hidden Welfare State,” “There is, still, a misconception that U.S. social programs primarily benefit the poor. That is not true for the visible welfare state direct expenditures, and it is an absurd claim to make about the hidden welfare state.”

As the political science literature shows persuasively, Democrats are far better for economic growth, and particularly middle-class and poor income growth, than Republicans. Yet even liberal commentators often fail to notice this. (Kevin Drum, for example, argues that “Democrats simply don’t consistently support concrete policies that help the broad working and middle classes.”) By focusing on major policies, these critics miss what Nathan Kelly calls, “market conditioning,” or the ways in which left-leaning governments shift market distributions through regulation, monetary and fiscal policy and other non-explicitly redistributive functions. In fact, there is a strong literature showing that parties on the left shift the income distribution. One notable example: While conservatives savagely attack unions, which dramatically shift the income distribution, while Democrats leave them alone. Further, Democrats tend to favor expansionary economic policies, while Republicans try to clamp down on inflation — which primarily benefits the rich. A cross-country study by Isa Camyar finds that firms perform better under left-wing governments because such governments spend more money on public fixed investment. This will naturally lead to higher wages. And while the real value of the minimum wage has increased 16 cents a year under Democratic presidents, it has decreased by 6 cents per year under Republicans. Liberal governments also do more to reduce unemployment, which is significant for earnings at the bottom of the income distribution.

So, while there is evidence that the in the era of globalization and finance, liberal parties can’t do as much to impact the distribution of income, it is nonetheless clear that liberals matter, as Bartel’s recent data extend to 2012.

On the other hand, the conservative premise — that inequality will increase growth and thereby benefit the poor and middle class — has been so thoroughly demolished that it can’t be stated with a straight face. A large body of empirical literature suggests that massive tax cuts for top earners do little but increase incomes at the top. Branko Milanovic and Roy van der Weide find, “high levels of inequality reduce the income growth of the poor and, if anything, help the growth of the rich.” Dan Andrew, Christopher Jencks and Andrew Leigh find that whatever modest effect that inequality has on growth is mitigated by the impact of inequality on the bottom. Intelligent conservative commentators have essentially surrendered the supply-side debate.

It’s clear a Democratic Party is better for middle- and low-income growth. However, while it’s entirely mythological that the poor tend to vote Republican, it is still true that Democrats have trouble with the white middle class. An important reason for this is that Democrats are often seen as the party that benefits the poor, particularly poor black Americans. My investigation of ANES data shows this phenomenon in action: Whites are opposed to welfare, but support helping the poor (see chart). A large literature shows that opposition to welfare and government is driven by racial animus. To this day, the historical portion of slaves in a county predicts Republican support and racial resentment. 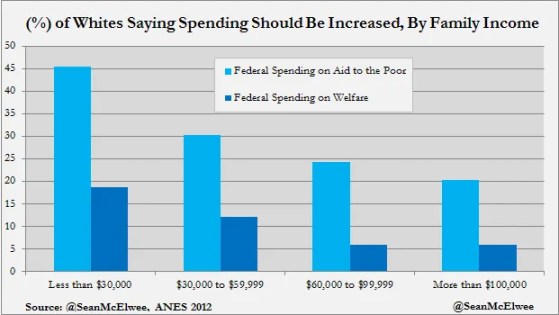 Because of our strange political system, middle-class white Americans can therefore believe that the government only takes from them and only helps black Americans. In fact, government programs frequently exclude people of color, and those that do benefit them are always on the chopping block. Whites, particularly Southern whites, often oppose programs that would help them simply to ensure that people of color remain in abject poverty. They see the bad parts of government in the form of taxes, but their welfare is hidden in a maze of subsidies. If you had to collect the mortgage interest deduction at the welfare office, Democrats would never lose another election.