The financial industry is a behemoth. Over the past 150 years, it has grown dramatically as a share of GDP. And entrance into its ranks has become a great way to enter into the top 1 percent of earners. (According to recent data, financial professionals have nearly doubled as a share of Americans in the top 1 percent.) At the same time, Wall Street is one of the most reviled institutions in the United States, with a recent study finding the lowest trust in finance recorded over 40 years.

Here are three good reasons to be distrustful of Wall Street, followed by one policy that would address all of them.

1. The Financial Industry Engages in Rent-Seeking

In economics, rent-seeking is the practice of making money simply by moving money around and collecting the resulting fees, rather than by facilitating profitable investment. The latter role is necessary for functioning markets; rent-seeking, however, is not.

There is now a strong literature suggesting that at some point, finance largely becomes extractive, while remaining at the same efficiency level. Thomas Philippon finds that the cost of financial intermediation has not fallen in 30 years. As Gautam Mukunda writes in a recent Harvard Business Review article, “Creative work increases a society’s wealth. Distributive work just moves wealth from one hand to another. Every industry contains both. But activity in the financial sector is primarily distributive.” Other studies come to the same conclusion:

This rent-seeking has increasingly starved the public sector across the nation. The Financial Times reports that “public investment in the U.S. has hit its lowest level since demobilization” after World War II.

The International Labor Organization’s (ILO) Global Wage Report finds that the financialization of the economy has been the most important factor in the decline of income share accruing to labor in developed countries. This is because the financial industry primarily distributes wealth upward.

A 2011 study examining the U.S. finds that, “financialization accounts for more than half of the decline in labor’s share of income, 10 percent of the growth in officers’ share of compensation, and 15 percent of the growth in earnings dispersion between 1970 and 2008.” In a paper published this year in the British Journal of Political Science, Christopher Witko finds, “financial deregulation was one policy translating the political power of these actors into economic outcomes.” That is, the rise of finance was a money grab by the 1 percent. 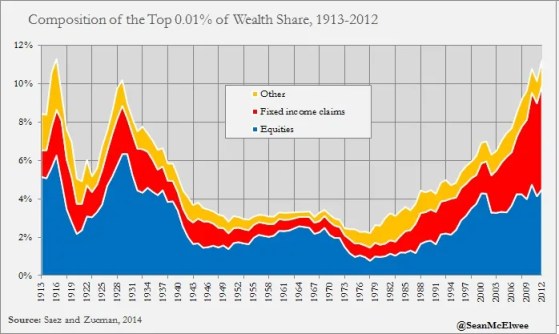 Because relatively few low-income and middle-income families own financial assets, they largely haven’t benefited from the rise of finance. Instead, it’s enriched the wealthy while saddling the middle class with debt. A recent study by Emmanuel Saez and Gabriel Zucman finds,

The key driver of the declining bottom 90%  share is the fall of middle-class saving, a fall which itself may partly owe to the low growth of middle-class income, to financial deregulation leading to some forms of predatory lending, or to growing behavioral biases in the saving decisions of middle-class households.

The charts below show how finance has enriched the top, whose wealth came from equities, while sucking money from the middle, whose wealth consisted of housing and pensions: 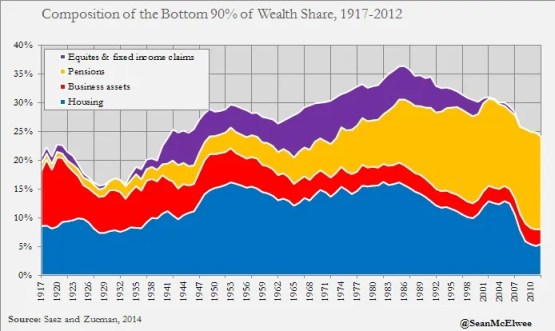 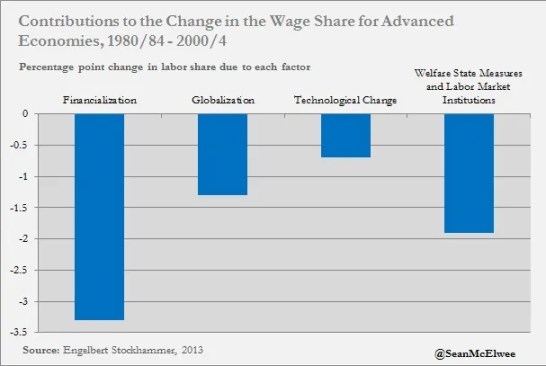 Those who had no assets at all saw their incomes shrink while wages remained stagnant for decades. As Matt Yglesias notes, in 2013, 25 hedge fund managers took home more twice as much as every kindergarten teacher in the country combined. This while hedge funds have failed to perform better than the market.

3. The Financial Sector Is Increasingly Engaged on High-Frequency Trading

One particularly negative form of trading that the STT could reduce is High-Frequency Trading (HFT). HFT is a useless and distortionary practice that allows investors to make money off of millisecond-quick trades. (HFT recently attracted attention in Michael Lewis’ book “Flash Boys.”) The practice has been derided by Nobel laureate Joseph Stiglitz as a sophisticated version of front-running (buying a stock shortly before a pending order to take advantage of the price increase).

The problem is that instead of channeling money toward profitable investment, HFT is a prime example of making money off of moving money around. A recent study finds that a one millisecond advantage can increase a firm’s earnings by $100 million a year. Ironically, while bridges are vulnerable to collapse across the country and infrastructure in general is sorely undercapitalized, high-speed traders spent $2 billion on infrastructure in 2010 — for high-speed cables to NYSE. HFT does nothing to benefit markets, but instead makes them more volatile.

The solution: A Financial Transaction Tax

When an industry has negative impacts on the broader public, economists call these effects “externalities.” It doesn’t mean we should destroy the industry, but rather, limit the harmful behavior. In much the same way that we should tax carbon dioxide — and do tax cigarettes and alcohol — we should also tax financial transactions.

The idea for a financial transaction tax has been around since John Maynard Keynes’ “General Theory.“ However, the idea began to gain traction in the late ’70s and ’80s with the rapid growth of the financial sector. In 1989, Lawrence Summers and Victoria Summers proposed a U.S. Securities Transfer Excise Tax, arguing that it could raise some $10 billion annually. Recently, the International Monetary Fund (IMF) hassupported a financial transaction tax as well. A metastudy by Neil McCulloch and Grazia Pacillo finds that a Tobin Tax (a type of FTT) would be “feasible and, if appropriately designed, could make a significant contribution to revenue without causing major distortions.”

From 1914 to 1966, the United States levied a 0.02 percent tax on sales and transfers of stock. Federally, Speaker Jim Wright pushed for a renewed tax in 1987, proposing a fee of 0.25 percent to 0.5 percent on the buyer and seller of each securities transaction, highlighting the tax’s progressive aspects. More recently, the “Wall Street Trading and Speculators Tax Act” was proposed by Sens. Harkin and DeFazio, which would assess a tax of 0.03 percent on trades of stocks, bonds, futures, options, swaps and credit-default swaps, and would generate $352 billion over 10 years.

Such a tax would not be unprecedented. On May 6, 2014, 10 European nations issued ajoint statement that a financial tax will begin in 2016 as a means to reduce speculation and raise revenue. The initial tax will focus on the trading of stocks and some derivatives, even though the initial proposal included taxing most financial products. The European Commission estimates that a broad tax could raise $39 billion (31 billion EUR) in annual revenues.

Further, there was a Stock Transfer Tax (a type of FTT) in place in New York from 1905 to 1981; revenue from the tax was split between the city and state (in the 1960s the full revenue reverted entirely to New York City). Because of a quirk in its phase-out, the STT remains technically legal in New York, though it is automatically rebated to the trader at a rate of 100 percent. Reducing this rebate would be a great way to boost revenues for New York and show the viability of a more expansive tax.

Finance is an important part of any economy. But the unprecedented rise of finance has harmed the real economy, propelled inequality and created opportunities for rent-seeking. To rein in Wall Street and prevent another financial crisis, and to give governments much needed money to invest, we should levy a modest tax on financial transactions. Right now, the financial industry subsists on monetizing privilege. It needs to shrink so we can grow.