Thomas Piketty’s wildly popular new book, “Capital in the 21st Century,” has been subject to more think pieces than the final episode of “Breaking Bad.” Progressives are celebrating the book — and its unexpected popularity — as an important turning point in the fight against global wealth inequality. This, of course, means that conservatives have gonecompletely ballistic.

Rush Limbaugh, for example, has come out guns a-blazing: “Some French socialist, Marxist, communist economist has published a book, and the left in this country is having orgasms over it,” he exclaimed during a recent broadcast.

When the right drops the C-bomb, the M-bomb and S-bomb all at once, you can be certain a book is having an impact. And “Capital” may well be the “General Theory” of the first half of the 21st century, redefining the way we think about capitalism, democracy and equality.

This, of course, means that the right-wing attacks have only just begun. That in mind, here is a handy guide to navigating the more absurd responses:

Claim: Piketty is a dirty Marxist

Thanks to Piketty, the Left is now having a “Galaxy Quest” moment. All that stuff their Marxist economics professors taught them about the “inherent contradictions” of capitalism and about history’s being on the side of the planners — all the theories that the apparent victory of market capitalism in the last decades of the 20th century seemed to invalidate — well, it’s all true after all.

How to respond: Most times someone drops the M-Bomb, he is intending to be provocative. With enough effort, you can make almost anything Marxist. While Marxists don’t agree on everything, and the term is very nebulous (Marx once said he wouldn’t describe himself as a Marxist), there are some pretty established rules for determining if someone is, indeed, a Marxist. First, he generally doesn’t write things like,

These are not the words of a Marxist, but rather a reasonable scholar, investigating the truth of the claims written by the greatest political economist who ever lived. The fact that Piketty abstains from the vitriol and misrepresentation that typify most writing on Marx are to his credit.

Piketty certainly does argue that capitalism will not inevitably reduce inequality, as economist Simon Kuznets had famously claimed. As to whether capital will accumulate without end, as Marx believed, he is more nuanced.

Piketty argues that capital will accumulate in the hands of the few when growth is slower than the rate of return on capital and dis-accumulate if not (This is the now famous “r>g” formula). As growth slows, companies can replace workers with machines (written by economists as “substitution between capital and labor”), but only if there is a high elasticity of capital to labor (higher elasticity means easier replacement). This means that the share of income going to the owners of capital will rise, and the distribution of that capital will become more unequal.

Piketty does not hold to a labor theory of value, he does not believe that capitalism is founded on the exploitation of the proletariat, and he does not believe the system will inevitably collapse on its own contradictions. But critics who call Piketty a Marxist don’t actually mean, “Piketty subscribes to a collection of propositions generally accepted by Marxists”; they mean it as a verbal grenade. Step over it and move to more substantive criticisms.

Claim: The social safety net has already solved the problem

In order to somewhat compensate workers for voluntary unemployment and the ludicrously low wages that “markets” pay them, modern societies have developed transfer systems, or social safety nets of various levels of robustness, to bolster the incomes of low-wage workers. Some conservatives argue that these transfers have solved the inequality problem.

Scott Winship, the lovable but irksome economist dedicated to upsetting the inequality consensus, writes in Forbes,

Most importantly, in the United States, most public transfer income is omitted from tax returns. That includes not just means-tested programs for poor families and unemployment benefits, but Social Security. Many retirees in the Piketty-Saez data have tiny incomes because their main source of sustenance is rendered invisible in the data.

How to respond: There’s not enough room to give his data claims a full airing. For our purposes, it suffices to say that, while America does have a transfer system, it’s far less robust than that of other developed nations. (See chart below, from Lane Kenworthy.) 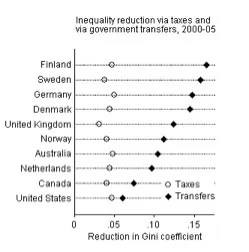 Government revenues are far lower in the U.S. than in other countries, making redistribution more difficult, and thus our safety net is far more frail. (See chart below, from Sean McElwee.) 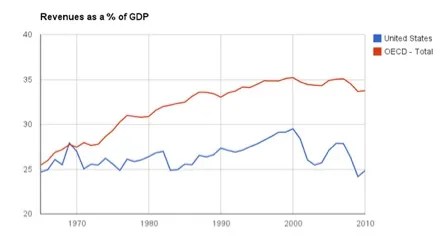 Far more interesting is what would happen if conservatives made this their line. After all, if transfers are what is preventing inequality from skyrocketing then the rising share of pre-transfer income accruing to the wealthy capital owners means we need more robust transfer system. Because few, if any, thinkers on the right have argued for a stronger transfer system (and are, in fact, attempting to violate it), they must accept the logical conclusion: Their policies will set off skyrocketing inequality (or, more likely: They don’t give a shit).

Claim: Inequality isn’t a problem because look at consumption!

Some conservative economists argue that an increase in income inequality has not been mirrored by an increase in consumption inequality because the wealthy save or invest their income. Kevin Hassett, a former Romney economic adviser, illustrates this point, arguing:

Although he initially made this argument against Piketty in 2012, he has revived it recently in a lecture on the subject.

How to respond: In large part, this is a common trope on the right — the “but they have cellphones!” argument. The empirical literature on this subject is still very much in flux, and there is not a consensus. Some recent studies find that consumption inequality has increased with income inequality. But even if we except the consumption inequality argument, conservatives have some explaining to do. After all, if income inequality has been rising while consumption inequality has stayed the same, where is the spending coming from? Debt. Which means that wealth inequality is increasing, as the rich save more and the poor fall further into debt. Research released this week by Amy Traub of Demos finds that the recent increase in credit card debt hasn’t been driven by profligate spending, but unemployment, children, the declining value of homes and lack of health insurance. Recent research by Emmanuel Saez and Gabriel Zucman show how the bottom 90 percent simply haven’t been able to save their incomes and thereby build wealth. (See chart below.) 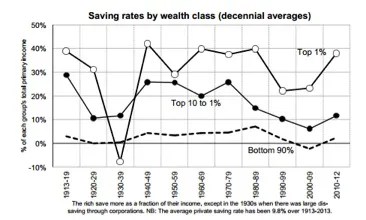 Tyler Cowen is one of the more honest of Piketty’s critics, and there is certainly a lot to like in his review. However, this section is a head-scratcher:

Piketty fears the stasis and sluggishness of the rentier, but what might appear to be static blocks of wealth have done a great deal to boost dynamic productivity. Piketty’s own book was published by the Belknap Press imprint of Harvard University Press, which received its initial funding in the form of a 1949 bequest from Waldron Phoenix Belknap, Jr., an architect and art historian who inherited a good deal of money from his father, a vice president of Bankers Trust… consider Piketty’s native France, where the scores of artists who relied on bequests or family support to further their careers included painters such as Corot, Delacroix, Courbet, Manet, Degas, Cézanne, Monet, and Toulouse-Lautrec and writers such as Baudelaire, Flaubert, Verlaine, and Proust, among others.

How to respond: It’s very true that in the past, many artists, writers and thinkers benefited from familial wealth (or rich benefactors). This, however, is not to be celebrated! It means that marginalized people are frequently removed from mainstream discussion. It’s also a dreadful defense of inequality. As theologian Reinhold Niebuhr writes,“The fact that culture requires leisure, is however, hardly a sufficient justification for the maintenance of a leisured class. For every artist which the aristocracy has produced, and for every two patrons of the arts, it has supported a thousand wastrels.”

Poverty and oppression can also create other powerful types of art, from boheim to the blues. More important, there are far better ways to fund the arts than throwing money at rich families and hoping they cook up something nice. For instance, the National Endowment for the Arts has funded arts education, dance, design, folk and traditional arts, literature, local arts agencies, media arts, museums, music, musical theater, opera, theater and visual arts. In the aftermath of the Great Depression the Works Progress Administration had an arm devoted to funding the arts that supported Jackson Pollock, William Gropper, Willem de Kooning, Leon Bibel and Ben Shahn. The CIA has even gotten into the game.

As Niebuhr notes, “An intelligent society will know how to subsidize those who possess peculiar gifts … and will not permit a leisured class to justify itself by producing an occasional creative genius among a multitude of incompetents.” It’s a wonder that conservatives want the wealthy financing art and philosophy — Marx, after all, would have died of penury without the beneficence of the wealthy Engels. Given that his economist friends have been impressed by Piketty’s cultural depth because of his ability to cite Jane Austen, I wouldn’t put much weight on their cultural defense of privilege.

Claim: Piketty is French, and we saved their asses in World War II

This is true. You’ve lost the debate.