James Surowiecki is very worried. He is worried that a large group of Americans are overworked and overtired. They are often called in at odd hours, which makes it harder for them to get a good night’s sleep and perform at high cognitive levels. These Americans are… Wall Street bankers. Surowiecki writes, “For decades, junior bankers and Wall Street firms had an unspoken pact: in exchange for reasonably high-paying jobs and a shot at obscene wealth, young analysts agreed to work fifteen hours a day, and forgo anything resembling a normal life.” Here’s David Brooks citing a similar, albeit broader, phenomenon in 2006,

Today’s super-wealthy no longer go off on four-month grand tours of Europe, play gin-soaked Gatsbyesque croquet tournaments or spend hours doing needlepoint while thinking in full paragraphs like the heroines of Jane Austen novels. Instead, their lives are marked by sleep deprivation and conference calls, and their idea of leisure is jetting off to Aspen to hear Zbigniew Brzezinski lead panels titled ”Beyond Unipolarity.” Meanwhile, down the income ladder, the percentage of middle-age men who have dropped out of the labor force has doubled over the past 40 years, to over 12 percent.

We’ll talk about labor force participation later, but let’s start with the assertion that the richest Americans are overworked. The first problem with this analysis is a distinction madepotently by Chris Rock [language] between a “job” and a “career.” He cites the difference his time at at Red Lobster, constantly scraping food into the garbage with his stand-up comedy and concludes, “There ain’t enough time when you got a career, when you’ve got a job, there’s too much time.”  Investment bankers, wealthy businessmen and thought leaders aren’t spending their long-weeks waiting tables and picking up trash, they’re doing intellectually fulfilling work, and being highly compensated for it. For instance, I’m sure most of us would you rather excited to jet off to Aspen to hear a lecture on “Beyond Unipolarity,” and would enjoy it far more than waiting tables for 8 hours in an uncomfortable uniform.

If Brooks and Suroweicki stepped out of their bubble, they would find many people working two jobs while raising children, or two jobs while attending college or one job with insane and inflexible hours with little way out. Some of them are lucky enough to work a job they like, others struggle through hours upon hours of drudgery for little or no pay and have virtually no control over the hours they work. Their privacy is routinely invaded, their time is not their own and their wages are stagnant. Research shows that this takes a significant toll on physical and emotional well-being (see page 75).

But even were we to pretend this distinction did not exist, there are still reasons to doubt the “hard-working rich” vs. “lazy poor” narrative. For one, the data don’t show it. Contra Brooks, a 2005 study by the Dallas Federal Reserve Bank finds that,

The decline in labor force participation is not due to the working class being lazy, but is rather, connected to economic growth. Worse, Brooks isn’t only wrong, he’s diametrically wrong. The report finds that the decline in labor force participation between 1994 and 2004 was actually more pronounced among those more with higher educational attainment:

In fact, labor force participation rates have risen among individuals ages 25 to 64 who lack a high school diploma—from 58.3 percent in 1994 to 63.2 percent in 2004. All other education groups have experienced declines, and the higher the education level, the greater the decline.

That is, the low level of labor force participation of the working class is more often due to the fact that they can’t find jobs than their unwillingness to work. 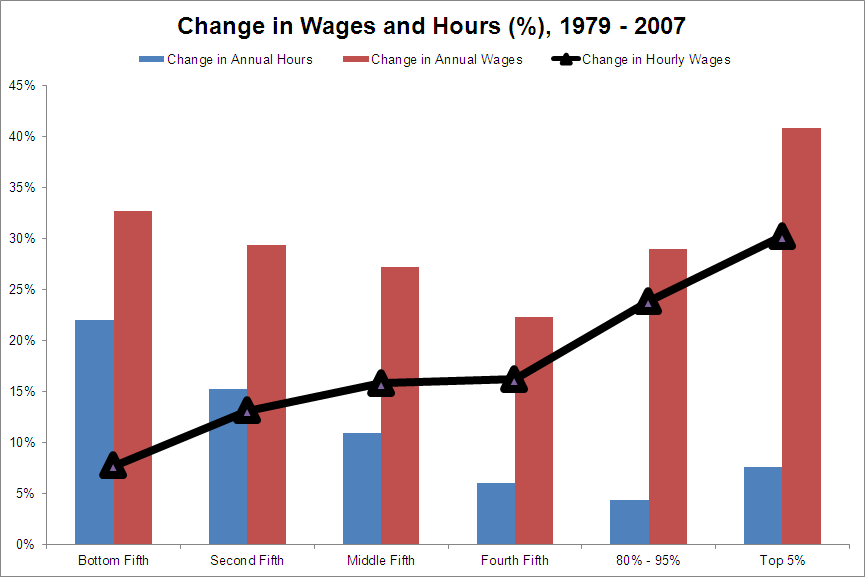 Source: Larry Mishel, “Vast Majority of Wage Earners Are Working Harder, And for Not Much More,” January 2013

Among the one percent, wage growth was even more obscene, 156.2% between 1979 and 2007.  Although the change has been for the rich to work fewer hours, they were working more hours in 1970, so the working class and middle class have been playing catch-up. They’ve taken more hours, but have lttle to show for it in terms of higher wages. It’s hard to square this data with the idea that the rich are working more and more and the poor are working less. In reality, the gap between hours worked by the rich and poor is closing (see line, right axis). 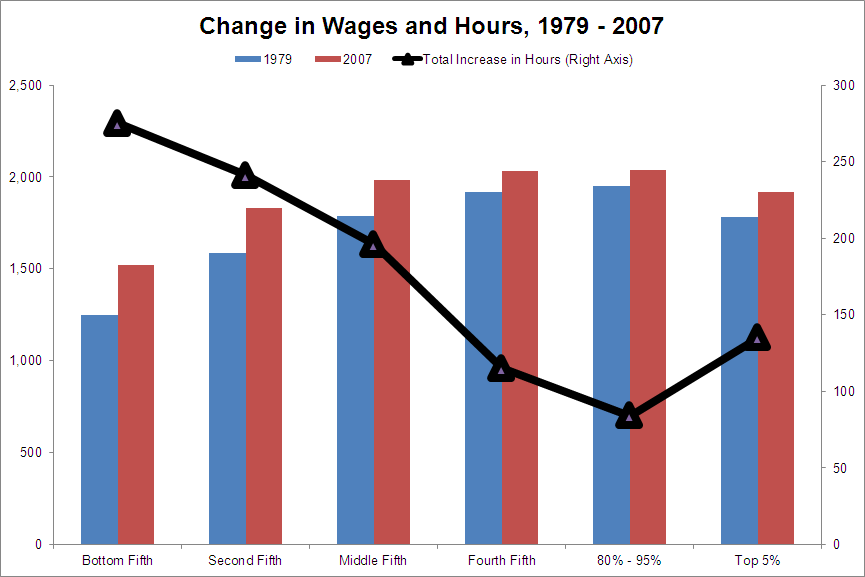 Source: Larry Mishel, “Vast Majority of Wage Earners Are Working Harder, And for Not Much More,” January 2013

The rich are working slightly more hours, but the real story is the dramatic increase in the hours by the poor and middle-class that are not corresponding with higher wages. And these hours are not of the same quality; they are more satisfying and less stressful.

So why this hard-working narrative? In the old days of a class, obscene inequality of wealth needn’t be justified. The rich were rich because they are born that way. Now that we live in a “meritocracy,” the rich often justify their wealth by citing their virtues and contrast it with the feckless poor. It helps them feel that the distribution of wealth is “just.” The other explanation is simply that Brooks and Surowiecki don’t know the working poor. They are wealthy guys with wealthy friends, and they see how “hard” their friends work and write about it. I’ve noted before how increasing inequality separates the experiences of the rich and poor. I’m lucky enough to know lots of poor and working class people as well as many wealthy people, which I suppose puts me in a unique place to call out this sort of bunk. It might make sense for The New Yorker or The New York Times to hire a few people who actually know what poverty looks like. Until then, we’re stuck with these “wealth-porn” narratives.

In conclusion, it seems hard, especially after The Wolf of Wall Street, to feel much sympathy for over-worked Wall Street bankers. They may well work insane hours, but they pay-off in terms of leisure, economic security, fulfillment and control of their work hours seems more than compensatory. They are the primary beneficiaries of the inequality that has robbed the middle class of $19,000 between 1970 and 2007. Wolf may be an exaggeration, but acquaintances who work in the field assure me that the apartments are lavish and the parties rancorous. The people who need attention, and help, are the millions of silent, working poor struggling to put food on the table. But you’re unlikely to find their story in a Brooks column.

Thanks to Mark Price for tweeting the Mishel brief.

One thought on “Careers and jobs”