Let’s accept the premise that U.S. federal debt is out of control and cannot be reined in by efficiency in the healthcare sector (an arguable premise). The way the government is cutting the deficit is the absolutely, objectively worst way the government could cut the deficit. The basic goal in the long-term would be to come at an agreement with modest entitlement cuts and modest revenue increases. Over time these would, with economic growth, get the debt as a percentage of GDP to the mythical 60% – 80%. The problem is that so far, nearly all the cuts are to discretionary spending (renewed every year) and are thus economically dangerous and don’t affect the long term-deficit: 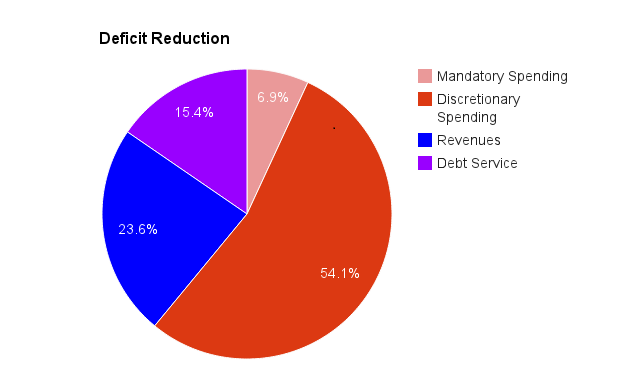 Keep in mind that this is just deficit reduction on paper. The CBO doesn’t do dynamic scoring, (taking into account the effects the policies have on the economy), so all those discretionary cuts could end up disappearing if they hobble the economy and thereby reduce revenues.

What’s particularly startling about the cuts to discretionary spending is that discretionary spending includes all of the important public investments we make to promote growth in the future. The Financial Times reports that, “Public investment in the US has hit its lowest level since demobilisation after the second world war because of Republican success in stymieing President Barack Obama’s push for more spending on infrastructure, science and education.”

Public investment is crucial to future growth. The economic boom in the 50s and 60s relied on government investments in education (G.I. Bill), infrastructure (National Highway System) and science (NASA). Now, education spending is hurting at the state level, our infrastructure is crumbling in front of our eyes and scientific researchers worry about the fate of their projects.

Investments in science produce huge benefits, both in terms of well-being and economic growth. The Human Genome Project, for instance, cost 3.8 billion in public funding and has produced economic gains of $796 billion (that’s a return of $140 to $1). The internet, too, was a product of government research and has produced tens of trillions in economic output and growth.

Our infrastructure is aging, and the American Society of Civil Engineers estimates that we will need to invest around 3.6 trillion by 2020 to move from a D + to a B. Numerous studies find that infrastructure investment brings about large economic returns.

But worst of all, public investment is going to decrease even more in the future, the only question is how much:

This will seriously harm U.S. competitiveness in the future; public investment spending provides immediate stimulus and productivity growth in the future. A Demos/Century Foundation/EPI study estimates that if the U.S. had begun investing about $250 billion a year into infrastructure in 2011, GDP growth each year would be .1 percentage points higher in 2021 and .5 percentage points higher by 2025. By By 2045, nominal GDP would be by 11.6% higher than baseline projections.

One thought on “The Worst Way to Cut the Deficit”