You have heard the pleas from Boehner and Republicans to end the “Democratic shutdown” by coming to the table and bargaining. If you have been trapped in alternate-reality GOP echo chamber, you might be starting to believe it’s true. “Why won’t Obama bargain?” you may ask yourself. Well, here’s one reason: he’s tried. Obama came to the table in 2011 offering entitlement reforms in exchange for higher revenues (through, say, cutting the Bush Tax Cuts or closing the huge number of loopholes in our sieve-like tax system). Republicans, having foolishly signed over their hearts, souls and minds to perpetually homeless-looking Grover Norquist, declined these bargains. As I’ve noted before, the Republican position here is: you get nothing. That’s my narrative: Obama comes to table, Republicans turn down every offer. You may believe something else. Let’s take a look at the facts.

Offer 1: Bowles-Simpson (Aka National Commission on Fiscal Responsibility and Reform)

In 2010, Obama established the National Commission on Fiscal Responsibility and Reform to produce a plan that would achieve long-term fiscal sustainability. He appointed Alan Simpson (R) and Erskine Bowles (D) to head the commission. On December 1st the commission released its proposal. 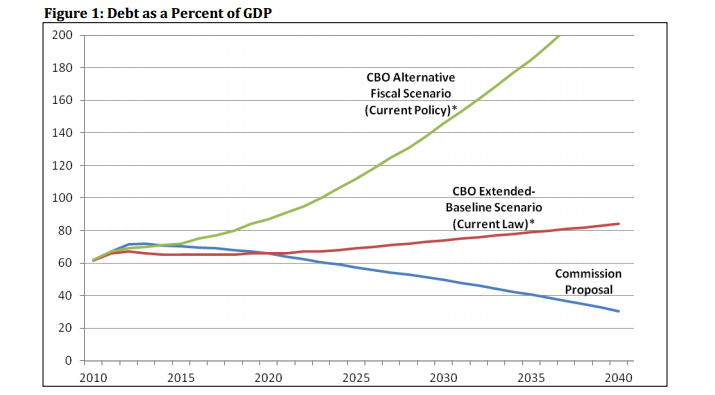 The proposal included 1,661 billion in discretionary cuts, $341 billion in healthcare (Medicare and Medicaid) cuts, $215 billion in other mandatory spending cuts, $995 billion in new revenues, $673 billion in interest savings and $238 billion in Social Security cuts between 2012 and 2020.

Why did it fail? Paul Ryan opposed the deal (and worked behind-the-scenes to get an even more radical proposal to block-grant Medicaid) and combined with the force of the Norquist no-tax pledge, the proposal was DOA. The vote was 11 – 7 in favor of the plan (short of the 14-vote threshold necessary to move forward to congress). All three Republican representatives on the commission (Paul Ryan, David Camp and Jeb Hensarling) voted “No.” Later, in a move so cynical it baffled the imagination, Ryan accused Obama of causing the plan to fail.

Established by the Budget Control Act on August 2, 2011 and aimed at ensuring that the idiotic and job-killing “sequestration cuts” would be avoided.

Why did it fail?

This failure was again due to the Republican refusal to countenance tax cuts. Instead, they aimed to keep the Bush Tax Cuts permanent. That’s right. When Republicans go to bargain for deficit reduction they put forward a plan to increase the deficit. Then, they savagely cut discretionary programs for the poor and call it a day.

An informal group of Senators (three from each party) that began meeting in July 2011.

The Senate “Gang of Six” produced a plan in July 2011 to cut deficits by $3.7 trillion through a combination of new revenue ($1 trillion) and spending cuts.

Why did it fail?

From Jennifer Rubin: “Rep. Paul Ryan (R-Wis.) often provides the details and the ammunition for conservatives to combat bad ideas; last night he dropped what one Republican Senate adviser called a “bomb” on the Gang of Six…”

During the same time the Senate “Gang of Six” committee was being squashed by Paul Ryan, the Biden working group was running into what would become a perennial problem: Democrats offered entitlement concession and Republicans refused to budge on new revenues. Many proposals were floated, but the demise of the “Gang of Six” spelled doom for the Biden meetings.

Allow me to make a few more observations.

1. Obama worked tirelessly to make the Affordable Care Act revenue-neutral, which is why he added in the Medical Device Tax and Cadillac Tax he opposed into the bill.

2. The National Review only cares about deficits while Democrats are in office.

3. Q. Who said this: “You know, Paul, Reagan proved that deficits don’t matter. We won the mid-term elections, this is our due.”

4. Paul Ryan has single-handedly ruined almost every attempt to work toward a bipartisan agreement.

6. It’s worth noting that in place of comprehensive entitlement reform and revenue increases, we’ve gotten economy-destroying discretionary cuts (i.e. what neither party wants).

All of these plans failed because the most powerful Republicans (Boehner, Cantor, Ryan) and the Tea Party Caucus are not looking for a compromise. They want unilateral concessions. 19. Remember that number. It’s how many times the Democrats tried to bargain with Republicans before the shutdown/debt ceiling. In The Price of Politics, Bob Woodward quoted Obama as constantly feeling like he was King Solomon and the Republicans kept trying to get him to chop the baby in half. It certainly seems like that. Remember in the Republican Presidential debates when all the candidates said they would turn down an offer of 10 – 1 spending cuts to revenue increases? That’s the problem we’re facing right now. Yeah, that’s why nothing is happening.