Congress will likely hammer out some sort of deal, which Republicans will love and Democrats will be forced to swallow, but it’s worth considering whether we view education in entirely the wrong way here in America.

In Britain, where my girlfriend lives, students don’t begin paying off their loans until they find stable employment, and the cost is in proportion to their earnings. Australia similarly ties the cost of paying off the loan to the income of the graduate. In Denmark, education is considered a right by the people and an investment by the government, and is therefore free. Some students are even offered a stipend by the government to defray costs. Norway has a similar system of higher education, in Sweden, students pay only a small fee. In America, the university is considered a commodity, one that can easily purchased by the wealthy, but not the poor. These represent a fundamentally different cultural attitude: elsewhere,  education is a public good, an investment or a right, in the U.S., it’s a privilege reserved for wealthy elites.

The OECD measures the difference in test scores between children from a high socioeconomic background and a low socioeconomic background. In the U.S., the difference is 112 points. In Denmark, by contrast, it’s s of 93 points, in Finland, it’s 62 points, in Canada 65, Norway, 77. Unequal primary education, combined with the high cost of college mean that while the U.S. has remained relatively high among college attainment rates (although it is falling), attainment rates for minorities are abysmal.

But it’s not just funding that’s different: poor children and rich children are taught differently. Whereas the children of  wealthy and middle-class parents are allowed free intellectual inquiry with teachers open to questions, the education of poor children is bureaucratized and dull. Jonathan Kozol described a program called “Success for All” (a curriculum designed for inner-city students) in Shame of a Nation,

[When the school adopted SFA] a martial regimen which teachers spoke of as “a reign of terror,” which included “silent lunch” and, for certain periods of time, even “silent recess,”had been instituted at the school. Children who, on occasion, fell into the natural rambunctiousness of students of their age were denied their recess altogether and compelled instead to remain indoors sitting cross-legged on the floor while other children had a chance to go outside. A fifth-grade teacher told me that her class, a nice group of children who were generally well behaved, was punished for one episode of misbehavior by the loss of recess for more than two months. In order to allow more time for drilling children for their literacy tests, music, art, natural science, and, in some respects most damaging, the social sciences were virtually abandoned at the school.

The problem with education is that for poor children, we’ve tried to make it capitalistic: ruthless, competitive, privatized. We’ve tried to fatten the cows by weighing them. And the result is obvious: a rigid class structure. Remember Waiting for Superman? The few black children who make it into the super-duper education system must leave their family to live in a small boarding house and study nearly every waking hour. Should we be surprised that wealthy students are prepared for higher education, inquiry and investigation, while poor students are prepared for technical high schools and then a minimum wage job.

Is it any wonder that the American dream is dying? Economists like Miles Corak have discovered that upward mobility is now lower in America than a host of other European countries, among them, Denmark, Sweden, Canada, France, Germany, Norway and Finland. Is it, as George Carlin claimed, “called the American dream because you have to be asleep to believe it?” Could this be because of the extraordinary cost of college education in the U.S.? 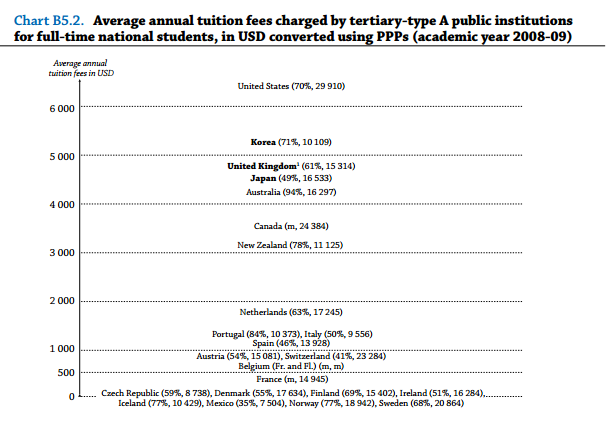 What can we do? Lowering student loans below the rate paid by the big banks who destroyed the economy and the lives of millions Americans would be a good first step. But it’s also a band-aid. Much like Nixon and Reagan ignored the plight of the power by launching a War on Drugs, Conservatives have obscured the true cost of poverty by advocating school choice union-busting. When I read of proposals to fix schools by privatizing them, I’m reminded of Slajov Zizek’s words,

It is not without irony to note how ideologists who once mocked this critical defense of socialism as illusory, and insisted that one should lay the blame on the very idea itself, now widely resort to the same line of defense: for it is not capitalism as such which is bankrupt, only its distorted realization.

We need government funded day care and mandatory maternity leave. We need to make our society more equal. Richard G. Wilkinson and Kate Pickett have found that more equal societies have higher education scores.  We need to integrate our schools, which are more race and class-segregated now than in the 1970s. New research shows that the U.S. cities that have the most upward mobility have high spending per pupil and low rates of racial segregation. That will mean more busing programs and measures to actively integrate schools. Interestingly, some European countries have moved towards the more capitalistic model of education we have here in America. The result, “educational choice tends to intensify class segregation through the effects of different preferences and information costs.” If we want to really improve schools we have to strike at what is causing some of them to fail: poverty, prison and segregation.

We need to treat education as both an investment in the economy and in informed, intelligent and active citizens. Remember that the biggest boom in American innovation came after WWII, when millions of Veterans attended college under the GI bill. Remember that the American dream, as enshrined by James Truslow Adams, was a place where, “each man and each woman shall be able to attain to the fullest stature of which they are innately capable, and be recognized by others for what they are, regardless of the fortuitous circumstances of birth or position.”

Many, like Charles Murray, believe that these policies are overly romantic, that education should be a commodity and the best education should be saved for the super-bright. He thinks poor students are failing because, well, they just aren’t as smart as rich kids, not because they haven’t had the same opportunities.

I disagree. As Stephen Jay Gould once noted, “I am, somehow, less interested in the weight and convolutions of Einstein’s brain than in the near certainty that people of equal talent have lived and died in cotton fields and sweatshops.” Could the next Einstein by dissuaded from college because of our flawed education system?

A version of this article originally appeared on Salon.com

To give Sean a job or tell him what you really think, e-mail him: seanadrianmc@gmail.com

4 thoughts on “How Other Countries Do Student Loans”